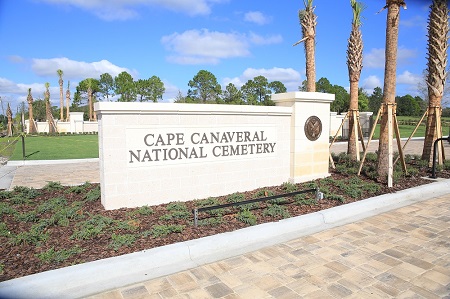 The new 318-acre cemetery in Mims, Fla., will serve the burial needs of more than 163,000 Veterans in the cemetery’s service area for the next 100 years.

Our cemetery floral policy exists only to reflect the honor and respect we hold for our Nation's Veterans, by preserving the dignity and solemnity of their final resting place.

We welcome and encourage fresh-cut flowers throughout the year and provide flower containers for gravesite display. Permanent plantings are not permitted.

Other seasonal adornments such as artificial flowers, potted plants, or poinsettias that are less than 18 inches in diameter are permitted for placement on gravesites during the period 10 days before and 10 days after Easter Sunday and Christmas.

Items left at the grave must be floral in nature and may not stand taller than 24 inches. Unauthorized items include artificial flowers (except the dates above), hazardous materials, glass, metal, toys, candles, balloons and non-US flags. No item may be attached to a headstone. Altering a headstone in any manner is prohibited. (i.e., marking, sitting on, placing objects upon, attaching photographs or keepsakes to, etc.).  Unauthorized items will be removed immediately. Removed items will be held for 30 days.

Floral pick up will be conducted on Thursday each week. Flowers that have become unsightly will be removed for mowing and maintenance purposes, or if damaged by weather or wildlife. Due to the open nature of the grounds, we cannot guarantee against theft, vandalism or the effects of nature.

The Department of Veterans Affairs (VA) purchased the land in July 2012 for $2.1 million.

The initial phase of construction provides approximately 17,000 gravesites and accommodates both casket and cremation interments. In addition to gravesites and columbaria, the cemetery includes other features such as a front entrance on U.S. Route 1, a public information center with an electronic gravesite locator and restrooms, an administration building, a maintenance building, a flag pole assembly area, a memorial wall with ossuary and walkway, and committal shelters. Other cemetery infrastructure features include roads, landscaping, utilities, and irrigation.

Ohioan Edwin T. Cowan (1920-2009) was a legendary Tuskegee Airmen who served in the U.S. Army Air Forces during World War II. Flight Officer Cowan graduated from the pilot training program at Tuskegee in 1944. He flew B-25 Mitchell bombers for the 477th Bombardment Group. As a civilian, Cowan worked for the U.S. Postal Service before earning a Master of Education and becoming a teacher and principal with the Cleveland public school system. He retired after 22 years and in 1978 Cowan and his wife, Theda, moved to Merritt Island, Florida, where he co-founded a chapter of the Tuskegee Airmen. In 2006, Tuskegee Airmen were honored for their service, belatedly, with the Congressional Gold Medal. Cowan's initial grave at St. Luke's Episcopal Church was unmarked. On February 7, 2019, Cowan and his wife (1920-2007) were reinterred at Cape Canaveral National Cemetery with full military honors (Section 11, Site 225).

Alene B. Duerk (1920-2018) was born in Defiance, Ohio. A 1941 graduate of the Toledo Hospital School of Nursing, she was commissioned as an ensign in the Nurse Corps, USNR in 1943. During WWII she served at Portsmouth, VA and Bethesda, MD and in the Pacific theater aboard USS Benevolence (AH-13). She was released from active service in June 1946. After, she earned a B.S. from Western Reserve University. She joined the Naval Reserve in 1948 and was recalled to active service in June 1951. For nearly two decades, she served in positions of increasing responsibility across the globe and became director of the Navy Nurse Corps in May 1970. She became the first female flag officer in June 1972, and the figurehead for her gender in the Navy. She retired in 1975. RADM Duerk is interred at Cape Canaveral National Cemetery (Section 10, Site 777).