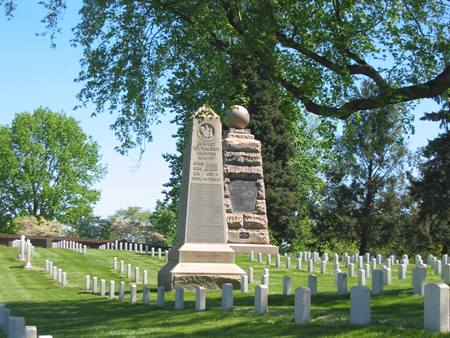 From 1862–65, numerous battles waged throughout the region, including the Battle of Cedar Mountain on Aug. 9, 1862, and the Battle of Chancellorsville, April 30 through May 6, 1863. So great was the loss of life on both sides during these encounters that many scholars consider these battles to be the fiercest fighting of the war. Afterward, many soldiers died of wounds in field or military hospitals. Most were buried where they fell or were interred in make-shift graves around encampments, hospitals or the battlefield.

Peer de Silva was born in San Francisco on July 26, 1917. He graduated from the U.S. Military Academy in 1941 and followed with intelligence training. He was a security officer for the Manhattan Project, responsible for the transfer of atomic weapons abroad. After World War II, he was assigned to the Army's Strategic Services Unit, precursor to the CIA, and began a long career in Cold War intelligence. He was honorably discharged as a lieutenant colonel in 1953. He served as a station chief at numerous locations throughout his career, including Saigon in 1963. Injuries sustained from a 1965 car bomb forced a reassignment to Washington, DC. He retired from the CIA in 1972 and authored a book about his career, posthumously published in 1978. He died August 13, 1978. (Section G, Site 751).

Rear Admiral John Marocchi was born in Bologna, Italy, on June 6, 1920. He was two when his family immigrated to the United States and settled in Clarksville, TN. He graduated from Austin Peay State prior to appointment to the U.S. Naval Academy class of 1942 (which graduated in December 1941). He was severely wounded on USS Birmingham (CL-62) during the Battle of Leyte Gulf during World War II. Marocchi served in the Korean and Vietnam wars as an intelligence officer and played a role in the resolution of the Cuban Missile Crisis and Pueblo Incident. He completed Army Airborne training at age 42 and was one of the few Navy officers to earn parachute wings. He retired in 1975 as deputy director, National Security Agency. Marocchi died July 12, 2014. (Section M, Site 83).