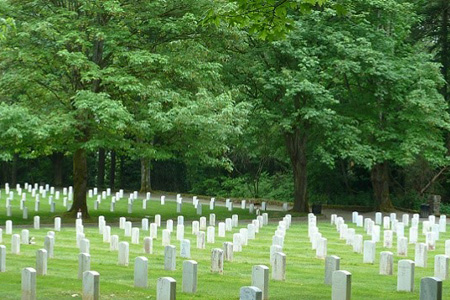 Fort Lawton Post Cemetery is closed to new interments. The only interments that are being accepted are subsequent interments for veterans or eligible family members in an existing gravesite. Periodically however, burial space may become available due to a canceled reservation or when a disinterment has been completed. If burial space is available at the time of request, the cemetery will assign these gravesites to eligible Veterans or family members. Since there is no way to know in advance when a gravesite may become available, please contact the cemetery at the time of need to inquire whether space is available.

The Fort Lawton Post Cemetery (FLPC) is located in the city of Seattle, WA in King County. The Fort Lawton Post Cemetery is approximately 3 acres in size and situated on the West Point Peninsula in Seattle, between Texas Way and Discovery Park Boulevard. Located in a wooded area, the FLPC is bordered by Discovery Park to the west and south and the Magnolia neighborhood (residential) to the east.

Pets are not allowed in Cemetery. (Trained service dogs only.)

In 1896, the Secretary of War selected what would later be Fort Lawton for construction of an artillery battery intended to defend Seattle and the south Puget Sound from naval attack. Local citizens and governments donated 703 acres land to the United States Army for the installation the next year.

On October 5, 1909 the United States Army's 25th Infantry Regiment which primarily consisted of African American soldiers transferred from the Philippines to Fort Lawton. These men are known as the Buffalo Soldiers.

During World War II, at least 20,000 troops at a time were stationed at Fort Lawton, with more than 1 million troops passing through both before and after the war. It was the second-largest port of embarkation for US forces and materiel to the Pacific Theater during the war.

The post was also used as a prisoner-of-war camp, with more than 1,000 Germans imprisoned there. Approximately 5,000 Italians were passed through en route to Hawaii for imprisonment. On August 15, 1944 an Italian POW, Guglielmo Olivotto, was found murdered at Fort Lawton after a night of rioting between Italian POWs and American soldiers. Twenty-eight African-American soldiers were later court-martialed, convicted of the crime, and sent to prison. They and their families challenged the convictions; after an investigation, the convictions were set aside in 2007.

Fort Lawton Post Cemetery likely was established around 1900. The cemetery is set out in four quadrants. Two former post commanders - Brig. Gen. Frederick Atkinson (1949) and Col. John Barber (1960s) are interred at Fort Lawton Post Cemetery. The cemetery also contains the graves of an unknown soldier and two World War II era prisoners of war. Above mentioned Guglielmo Olivotto and German soldier Albert Marquardt, who died of accidental poisoning in 1945 are interred in gravesites on the perimeter of the cemetery.