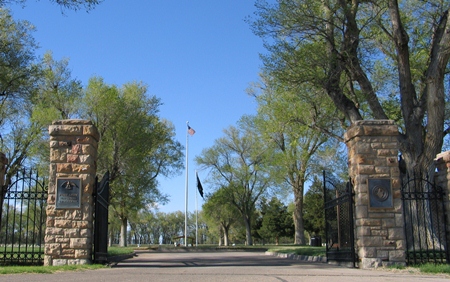 The cemetery is located seven miles east of Las Animas on Highway 50 at the end of the Northeast Road. The nearest airport is in Pueblo County (approx. 87 miles west of Ft. Lyon on Route 50).

Floral arrangements accompanying the casket or urn at the time of burial will be placed on the completed grave. Natural fresh cut flowers may be placed on graves at any time of the year. They will be removed when they become unsightly or when it becomes necessary to facilitate cemetery operations such as mowing. Flowers ordered for delivery to the cemetery must be delivered directly to the gravesite by the florist.

Christmas wreaths, grave blankets and other seasonal adornments may be placed on graves from December 1 through January 20. They may not be secured to headstones or markers. Grave Floral Blankets may not be larger in size than 2x3 feet.

Fort Lyon is located in Bent County, Colo., seven miles east of Las Animas. The fort was originally named Fort Wise in honor of Henry A. Wise, governor of Virginia. However, with the outbreak of the Civil War, it seemed inappropriate to have a Union fort named after the governor of a Southern state, and the name was changed. The new name Fort Lyon was chosen to honor Brevet Brigadier General Nathaniel Lyon, who was killed at the Battle of Wilson Creek on Aug. 10, 1861; he was the first Union general to die in battle.

Shortly after its establishment in 1887, Fort Lyon was moved to its current site just below the mouth of the Purgatoire River because floods at the original location threatened to destroy equipment and personal belongings. Within days of the move, the fort commander Captain Penrose began constructing new buildings. Fort Lyon is noted for being the last residence of the famous Army scout, trapper and adventurer, Christopher "Kit" Carson. Carson was brought to Fort Lyon's Dr. Henry Tilton for treatment of an illness that had been aggravated by a trip to Washington, D.C., during the proceeding winter on behalf of peaceable relations with the Ute Indians. Carson died of a ruptured aneurysm May 23, 1868.

The U.S. Army abandoned Fort Lyon in 1897 and its troops were transferred elsewhere. The remains of soldiers buried at the post were disinterred and moved to Fort McPherson National Cemetery in Nebraska. In 1906, the U.S. Navy took advantage of Colorado's mild, dry climate and opened a sanitarium for treating sailors and marines suffering from tuberculosis. On June 22, 1922, the Veteran's Bureau assumed operations and the hospital was opened to veterans from all branches of the service. In 1930, administration of the hospital was transferred to the newly created Veterans Administration and within three years the VA designated Fort Lyon a neuropsychiatry facility.

The original burials commenced in 1907 as the Naval hospital cemetery, and they continued under the Veteran's Bureau and Veterans Administration. Records indicate the first veteran interred at Fort Lyon was Youayoshi Hosi, a Japanese-American from Pennsylvania who served as a Navy warrant officer during the Spanish-American War. During World War I, German prisoners of war who had contracted tuberculosis were entitled to treatment in American hospitals under the Geneva Convention. A number of these prisoners resided at the Naval Hospital at Fort Lyon. Relations between German soldiers and the Americans were friendly and a custom was established for decorating the graves of two members of the German Imperial Navy interred in the national cemetery with the German flags on Memorial Day. The cemetery was transferred to the National Cemetery System in September 1973.