Guardsman Lane
Missoula, MT 59804
[Do not mail items to this address] 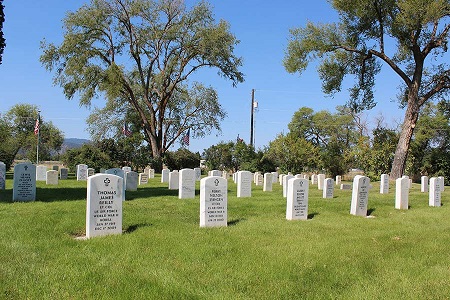 Ft. Missoula Post Cemetery is currently closed to new interments. The only interments that are being performed are subsequent interments for Veterans or eligible family members in an existing gravesite.

Fort Missoula Post Cemetery is in the city of Missoula, MT. The post cemetery is approximately 1 acre in size. The property is located within the Fort Missoula National Historic Register District.

Cemetery policies are conspicuously posted on the property and readily visible to the public.

Pets are not allowed in Cemetery. (Trained Service dogs only.)

Fresh cut flowers may be placed on the graves throughout the year. Floral arrangements accompanying the casket or urn at the time of burial will be placed on the completed grave. They will be removed when they become unsightly.

Artificial flowers are only permitted on graves during periods when their presence will not interfere with grounds maintenance.

Permanent plantings are not permitted on graves at any time.

Potted plants are only permitted on graves five days before and five days after Easter and Memorial Day.

Floral items will be removed from graves as soon as they become faded or unsightly.

Christmas wreaths or grave blankets are permitted on graves during the holiday season and will be removed not later than January 20th. Grave floral blankets may not be larger than two feet by three feet.

Floral items and decorations may not be secured to headstones. Unacceptable items include statues, vigil lights, glass objects, pinwheels, balloons, political signs or items, commemorative items, and any grave decoration taller than the headstone.

During the lawn mowing and grounds maintenance season, floral items will be removed from graves every week. The lawn mowing schedule is available from the cemetery staff.

The U.S. Army established Fort Missoula in 1877 to guard the Bitterroot Valley in the Montana Territory after years of petitioning from local citizenry for military presence. The post cemetery was established the following year. The cemetery occupies 1.24 acres and is the oldest active burial ground in Missoula, with interments from all U.S conflicts from the Civil War to Vietnam. The fort saw significant activity from 1933 through World War II. From 1933–1942, Fort Missoula served as the Rocky Mountain Regional Civilian Conservation Corps' administrative center, the largest CCC headquarters in the country. During World War II, it was the Immigration and Naturalization Service's largest internment camp for non-military foreign and native persons—primarily Italian nationals and Japanese Americans.

The first recorded burial at the post cemetery was Pvt. William Gericke who died September 26, 1878. Two Medal of Honor recipients from the Indian Wars (1865–1891) are interred here: Cpl. Harry Garland and Pvt. Michael Himmelsback. A large number of graves are African Americans who served in the 24th and 25th Infantry regiments, which were garrisoned there from the late 1800s into the early 1900s. Thirty-six remains were reinterred in Fort Missoula following the closure of Fort Ellis, near Bozeman, in 1886. Several women, wives of officers and senior sergeants, are buried in the cemetery, as are more than 50 children who lived at the fort. The cemetery is closed to burials other than those of Veterans or eligible dependents in existing gravesites. Fort Missoula was formally decommissioned in 2001 and the Army transferred the post cemetery to NCA on October 16, 2019. Fort Missoula Post Cemetery was listed on the National Register of Historic Places in 1987 as a contributing feature of a larger Army post district.

Corporal Harry Garland (Indian Wars) was born in 1844 in Boston, Massachusetts. He fought with the 2nd U.S. Cavalry and was part of post-Little Bighorn operations against Native Americans in the region. He received the Medal of Honor for gallantry in action in two separate engagements. The first was against Lakota Chief Lame Deer at Little Muddy Creek, Montana, on May 7, 1877. The second was against the Nez Perce at Camas Meadows, Idaho, on August 20, 1877. In this event, Garland was shot through the left hip and was left unable to stand. He never fully recovered from his wounds and received a warrant promotion to Hospital Steward at Fort Ellis, assuming this duty in December 1878. He died May 21, 1883 and was buried at Fort Ellis. When the hospital closed in 1886 his remains were moved to Fort Missoula (Row 1, Plot 3).

Private Michael Himmelsback (Indian Wars) was born in 1849 in Allegheny County, Pennsylvania. He fought in Co. C, 2nd U.S. Cavalry. Himmelsback received the Medal of Honor for gallantry in action at Little Blue, Nebraska, on May 17, 1870. In this engagement, Himmelsback was part of a five-man detachment sent to recover stray horses. The party was attacked by a large group of Native Americans and all their horses were killed. The party held off their attackers and withdrew by foot, rescuing a party of settlers – two women and two children – in the process. Himmelsback died of kidney disease at Fort Ellis Hospital, Montana, on January 5, 1881. When the hospital closed in 1886 his remains were moved to Fort Missoula (Row 1, Plot 5).

Other Burials
US Army Major General Frank William Milburn served in World War I, World War II and the Korean War. He was a decorated hero, receiving numerous valor awards. He later served as the Athletic Director at Montana State University.