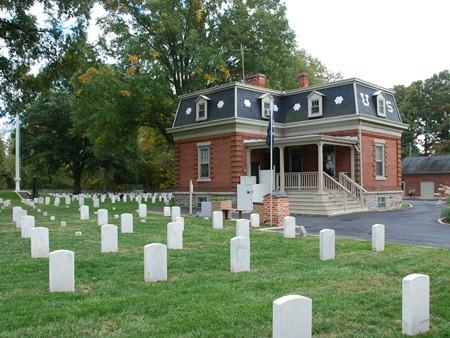 Glendale National Cemetery is closed to new interments. The only interments that are being accepted are subsequent interments for veterans or eligible family members in an existing gravesite. Periodically however, burial space may become available due to a canceled reservation or when a disinterment has been completed. When either of these two scenarios occurs, the gravesite is made available to another eligible veteran on a first-come, first-served basis. Since there is no way to know in advance when a gravesite may become available, please contact the cemetery at the time of need to inquire whether space is available.

Glendale National Cemetery was established May 7, 1866, on land purchased from a local resident, Lucy C. Nelson. The cemetery name is taken from the farm located on this property, which served as a Union headquarters during the Civil War. Original interments were the remains of Union soldiers recovered from Malvern Hill, Frayer’s Farm, Harrison’s Landing and other areas in the vicinity. An inspector’s report of July 26, 1871, notes a total of 1,189 interments, including 236 known and 953 unknown gravesites. The cemetery is composed of a nearly square plan, with the graves laid out in picturesque, concentric rows.

Glendale National Cemetery was listed on the National Register of Historic Places in 1996.

Monuments and Memorials
There are no monuments or memorials located at Glendale National Cemetery.

Corporal Michael Fleming Folland (Vietnam). He received the Medal of Honor posthumously for service in the U.S. Army, 3rd Infantry, 199th Infantry Brigade, in recognition of heroism during a reconnaissance mission at Long Khanh Province, Republic of Vietnam, July 3, 1969. Folland is buried in Section H, Site 846.

More than half of VA's national cemeteries originated with the Civil War and many are closed to some burials. Other sites were established to serve World War veterans and they continue to expand. Historic themes related with NCA's cemeteries and soldiers' lots vary, but visitors should understand "Why is it here?" NCA began by installing interpretive signs, or waysides, at more than 100 properties to observe the Civil War Sesquicentennial (2011-2015). Please follow the links below to see the interpretive signs for Glendale National Cemetery.