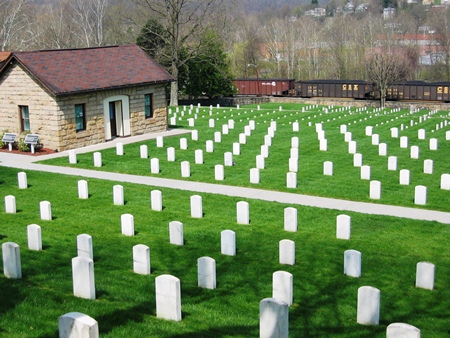 Grafton National Cemetery is closed to new interments. The only interments that are being accepted are subsequent interments for veterans or eligible family members in an existing gravesite. Periodically however, burial space may become available due to a canceled reservation or when a disinterment has been completed. When either of these two scenarios occurs, the gravesite is made available to another eligible veteran on a first-come, first-served basis. Since there is no way to know in advance when a gravesite may become available, please contact the cemetery at the time of need to inquire whether space is available.

Military Funeral Honors
The Grafton National Cemetery is fortunate to have several groups in the local area that will render Military Funeral Honors upon request for any veteran interred in this cemetery. They perform a very dignified and compassionate service and consider it an honor to do this for a fellow comrade. For information please contact the cemetery.

The Grafton National Cemetery is not responsible for any items left at the gravesite. Flowers are placed at your own risk; they will not be replaced by the cemetery if they are lost, stolen or damaged.

Floral arrangements accompanying the casket or urn at the time of burial will be placed on the completed grave.

We welcome and encourage fresh-cut flowers throughout the year. They will be removed when they become withered, faded or otherwise unsightly. The cemetery supplies temporary vases for visitors to use when placing flowers at a gravesite. The vases are located in receptacles throughout the cemetery. Water is also available at that same location.

During the growing seasons, all floral items will be removed from graves weekly or when it becomes necessary to facilitate cemetery operations such as for mowing and trimming.

Christmas wreaths, grave blankets and other seasonal adornments may be placed on graves from December 1 through January 20.

Floral items and other types of decorations cannot be secured to the headstones. Unauthorized items will be removed and discarded.

Any questions or concerns please feel free to contact the cemetery.

In 1867, Maj. R. C. Bates was ordered by the War Department to locate a permanent burial site for the Union soldiers who had died in hospitals and battlefields throughout West Virginia. Bates chose the Grafton location because it was relatively level in a region noted for mountainous terrain and it was near Maple Avenue Cemetery where many war dead had already been buried. The federal government appropriated the three-acre site in 1867. The steep slope was graded into three terraces with a walkway down the center that divides the cemetery into two equal parts. The first interments were in the lower two terraces: 1,252 Union soldiers, 613 of them unknown. Six-inch square markers distinguish the unknown remains. Approximately half the original interments came from Clarksburg, W.Va. Other remains were brought to the national cemetery from Wheeling, Rich Mountain and Fayette County.

In 1903, Thornesberry Baily Brown was reinterred at Grafton National Cemetery. Brown was rumored to be the first Union casualty of the Civil War, having been killed May 22, 1861, when he refused a Confederate sentry’s order to halt and shot the sentry in the ear. The sentry responded by shooting Brown through the heart. The Brown monument is a marble obelisk that was erected by the GAR, Reno Post No. 7, and dedicated on April 28, 1904.

Grafton National Cemetery was listed on the National Register of Historic Places in 1982.

More than half of VA's national cemeteries originated with the Civil War and many are closed to some burials. Other sites were established to serve World War veterans and they continue to expand. Historic themes related with NCA's cemeteries and soldiers' lots vary, but visitors should understand "Why is it here?" NCA began by installing interpretive signs, or waysides, at more than 100 properties to observe the Civil War Sesquicentennial (2011-2015). Please follow the links below to see the interpretive signs for Grafton National Cemetery.