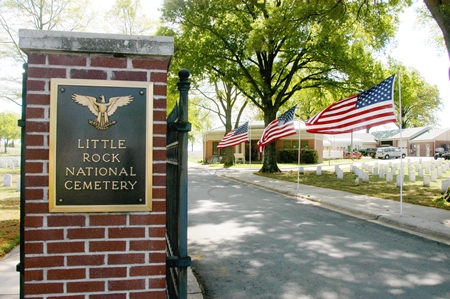 Little Rock National Cemetery is closed to new interments. The only interments that are being accepted are subsequent interments for veterans or eligible family members in an existing gravesite. Periodically however, burial space may become available due to a canceled reservation or when a disinterment has been completed. When either of these two scenarios occurs, the gravesite is made available to another eligible veteran on a first-come, first-served basis. Since there is no way to know in advance when a gravesite may become available, please contact the cemetery at the time of need to inquire whether space is available.

Cemetery is located in the southeast section of Little Rock. It may be reached from Interstate 30. Exit at Roosevelt Road, and travel east approximately three blocks. From Little Rock National Airport, travel Interstate 440 west to Springer Boulevard. Turn right, proceed approximately 3/4 mile to the cemetery.

This cemetery is overseen by Fort Smith National Cemetery. Please contact this cemetery at the number listed above.

Little Rock National Cemetery is located in Little Rock, Ark., approximately two miles southeast of the state capital. The first European visitor to this region was Spanish explorer Hernando de Soto who, in 1541, first crossed the Mississippi into what would become Arkansas. Unable to locate the fabled city of gold, de Soto left the region and it was almost 200 years before French explorer Bernard de la Harpe brought new attention to area. In 1722, during his survey of the Arkansas River, Le Harpe named the river bluff La Petite Roch, or "the Little Rock." The area turned out to be a convenient point for crossing the Arkansas River and was near a Quapaw Indian settlement, so La Harpe established his trading post here. When Arkansas became a territory in 1819, the capital was located at Arkansas Post, a site downriver. Two years later it moved to the busy town of Little Rock. Little Rock was incorporated as a city in 1831 and became the capital in 1836 when Arkansas was admitted to the Union.

Although Arkansas had entered the Union as a slave state, its population was divided on the question of secession. In 1861, after officials refused to send troops to fight in the Union Army, a convention met and voted to secede from the Union, reversing an earlier decision. Following the Battle of Pea Ridge in 1862, Union forces captured Little Rock and held the city for the remainder of the war.

Early in the Civil War, the land that is currently the national cemetery was located outside city limits and was used for Union encampments. With Union troops still occupying the city in 1866, a portion of the new city cemetery was purchased by the government and set aside for military interments.

The government purchased the military plot in Little Rock City Cemetery as two parcels: 9.1 acres in September 1866 and 3.2 acres in April 1868. On April 9, 1868, it was designated a national cemetery with the stated purpose to concentrate remains of Union dead who had been buried throughout Arkansas. By this time, there were 5,425 interments: 3,092 known dead and 2,333 unknowns. In 1868, 1,482 remains removed from area battlefield graves were reinterred here.

In 1990, the National Expansion Corp. purchased additional land from the adjoining Oakland Fraternal Cemetery and formally donated it to the United States for expansion of the national cemetery. In November 1999, the City of Little Rock donated one additional acre. Little Rock National Cemetery, encompassing a little over 31 acres, was listed on the National Register of Historic Places in 1996.

Monuments and Memorials
The granite and bronze Minnesota Monument was dedicated to 162 Minnesota soldiers who fell in Arkansas during the Civil War. Erected in 1916, it is one of seven Minnesota monuments found in the national cemeteries. The memorialized soldiers were enlisted in the 3rd, 5th, 7th, 9th and 10th Minnesota U.S. Volunteers. The sculptor was John K. Daniels of St. Paul, Minn. Other Minnesota monuments are located at Marion, Ind. (1913); Memphis (1916), Nashville (1920) and Shiloh (1908) Tenn.; Jefferson Barracks, Mo. (1922); and Vicksburg, Miss. (1906-07). Daniels also did the monuments at Nashville and Shiloh national cemeteries.

The marble Confederate Monument was erected in 1884 by trustees of the Mount Holly Cemetery in honor of the 640 Confederate soldiers originally buried in this cemetery and later re-interred in Little Rock National Cemetery. The soldiers died in Arkansas, Missouri, Texas, and Louisiana between1861-1863.

As a significant sculpture of the post-Civil War period (1886-1934) in Arkansas, both monuments were individually listed on the National Register of Historic Places in 1996.

Captain Maurice L. Britt (World War II). He received the Medal of Honor while serving in the U.S. Army, 3rd Infantry Division, for actions north of Mignano, Italy, November 10, 1943. Britt died in 1995 and is buried in Section 20, Site 319.

Other Burials
Tennessean Simon A. Haley (1892-1973) was the youngest child of former slaves. His father was a sharecropper. Haley worked the farm and attended school at Lane College, then A&T College in Greensboro (NC). He struggled to pay for the tuition and one summer took a job as a Pullman Porter. Upon returning to campus, Haley learned that a passenger from the train paid all his fees. He finished top in his class and won a scholarship to Cornell University, but World War I interrupted his graduate studies. Sergeant Haley served in the U.S. Army in France, 1918-1919. After the war, he finished his degree and taught agriculture at universities in Alabama and Arkansas through the mid-1950s. He is buried in Little Rock National Cemetery (Section 16, Site 1429). His son and World War II veteran, Alex, wrote the Pulitzer Prize-winning book, Roots: The Saga of an American Family.

Louisiana native Frank Moore (1888-1932) began as a sharecropper but became one of the "Elaine 12," a benchmark case heard by the U.S. Supreme Court. Moore registered for the draft in 1917 and was called to active duty with the 162d Arkansas Depot Brigade. Private Moore was honorably discharged in December 1918. After World War I, he joined the Progressive Farmers and Household Union to advocate for equitable treatment for sharecroppers and crop compensation. In 1919, racial violence erupted at a union meeting in Elaine, Arkansas, where about 200 black citizens were killed in the aftermath. Twelve men were condemned to death for their association with the riot; the case went to the Supreme Court, whose ruling addressed due process and strengthened the Bill of Rights. Moore and his co-defendants were freed. Moore moved to Chicago where he died. He is buried in Little Rock National Cemetery (Section 5, Site 6528).

More than half of VA's national cemeteries originated with the Civil War and many are closed to some burials. Other sites were established to serve World War veterans and they continue to expand. Historic themes related with NCA's cemeteries and soldiers' lots vary, but visitors should understand "Why is it here?" NCA began by installing interpretive signs, or waysides, at more than 100 properties to observe the Civil War Sesquicentennial (2011-2015). Please follow the links below to see the interpretive signs for Little Rock National Cemetery.