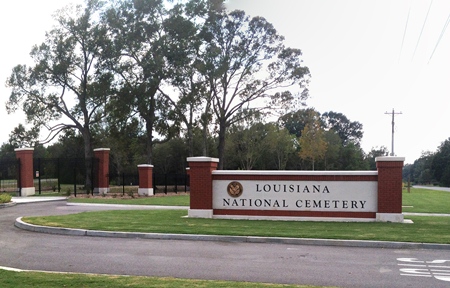 Cemetery is located seven miles West of Zachary, LA., 1/4 mile off US 61 Hwy.

Louisiana National Cemetery is located in East Baton Rouge Parish approximately six miles from Zachary, Louisiana, and less than two miles from Port Hudson National Cemetery. Opened in 2012, it is an expansion of the latter Civil War-era national cemetery, which closed the same year.

More than five nations in the last 300 years have claimed the land occupied by Louisiana National Cemetery. French explorers first set foot East Baton Rough Parish in 1699 and recorded activities of the Bayou Goula and Houma Indian tribes. Several other American tribes — the Choctaw, Chitimacha, Coushatta, and Quapaw — lived there until the U.S. government forcibly removed them, per the Indian Removal Act of 1830.

The French constructed an outpost in 1718 near present-day Baton Rouge to protect northbound traders heading home after selling their goods in New Orleans. At the end of the French and Indian War, the 1763 Treaty of Paris transferred this territory to English ownership. The British Army occupied Baton Rouge during the American Revolution.

Spain declared war on England in 1779. Marching north from New Orleans, Spanish forces captured Baton Rouge and defeated the English at Fort Butte, just west of the city. The Spanish were the third European nation to hold Baton Rouge and the surrounding territory. By 1781, lands from Louisiana to west Florida were under Spanish control. Spain ceded much of its North American holdings to France in 1802; France, in turn, in 1803 sold it to the United States as the Louisiana Purchase. However, the area between southern Louisiana and Florida remained contentious for a few more years. In 1810, local settlers overthrew the Spanish who remained in control, and declared independence as the West Florida Republic. Louisiana annexed the territory a few months later. East Baton Rouge Parish was created during the annexation to Louisiana.

Louisiana became a state on April 8, 1812, and it prospered early on. The port city of New Orleans and a vast network of rivers supported an easy economy based on trading. Fertile land made it one of the richest regions in North America. However, the wealth and agricultural economy was dependent upon intense human labor. As a result, Louisiana seceded from the Union on the eve of the Civil War, January 26, 1861. Federal troops controlled Baton Rouge for most of the war, however, from May 1862 until the Confederate surrender in 1865.

The most noteworthy Civil War battle in the vicinity of East Baton Rouge Parish occurred at Port Hudson, the southernmost Confederate bastion on the Mississippi River. For this reason it was strategically critical to both sides. The town of Port Hudson was ringed by artillery redoubts and trenches that protected a 6,800-man garrison commanded by General Franklin Gardner. In March 1863, Union forces began to assemble outside Port Hudson; by May, 30,000 troops under General Nathaniel Banks were ready for battle. The Union Navy, led by Admiral David G. Farragut, attacked from the Mississippi River on May 14. Direct assaults twice failed to take the Confederate defenses on May 27 and June 14, 1863. The town of Port Hudson surrendered on July 9 after a 48-day siege, and after Gardner learned of the surrender of Vicksburg upriver. Port Hudson National Cemetery was established in 1867 to bury federal dead from this event.

Today, this area is one of the best-preserved Civil War battlefields in the country. The breastworks, gun pits and trenches remain largely unchanged since the battle. In 1974, Port Hudson State Historic Site, which encompasses Port Hudson National Cemetery, was designated a National Historic Landmark.

As the parish residents focused on rebuilding their lives after the Civil War, little changed in the 19th century. The parish’s location on the Mississippi River attracted industry early in the 20th century. Following World War II, thousands of families flocked to East Baton Rouge Parish from across the nation to obtain new, highly-skilled industrial jobs created in the wake of war manufacturing. This economic boom elevated Baton Rouge to one of the South’s leading industrial, educational, and business centers. As the state capitol city grew, and so did the parish. More than two-thirds of the Baton Rouge population lives immediately outside the limits of Baton Rouge City and in unincorporated areas of the parish.

NCA purchased the 103.8-acre site of Louisiana National Cemetery in 2011. Since at least 1941, the property consisted of agricultural fields and woodlands. Forested areas contained sweet gum, American elm, red maple and water oak. Although small rural homes were located along East Mt. Pleasant-Zachary Road in the early 20th century, evidence of this occupation is gone.

Louisiana National Cemetery opened Oct. 24, 2012, to serve the estimated 293,000 veterans and eligible family members in the parish and surrounding area.