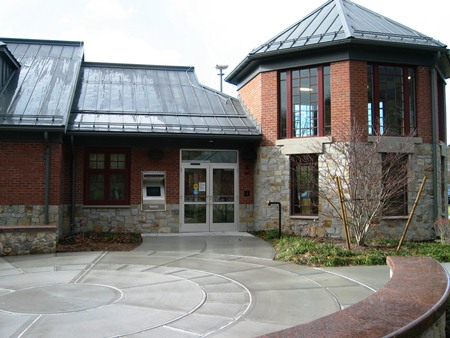 Cemetery is equal distance from Logan Airport, Boston, Mass., and T. F. Green Airport, Providence R.I. From Logan Airport, take the Ted Williams Tunnel to Interstate 93 south. Follow Interstate 93 south to Interstate 24 south. Follow Interstate 24 south and exit on Interstate 495 south, which continues, into Route 25 east. Go over the Bourne Bridge – at base of bridge there is a rotary – go ½ way around rotary onto Route 28 south toward Falmouth. Continue on Route 28 south approximately four miles to a second rotary. Go ¾ way around the rotary you will see the sign leading to Massachusetts Military Reservation. Exit the rotary at this point. Entrance to cemetery is approximately ½ mile from the rotary. From T. F. Green airport take Interstate 95 North to Providence and then exit on Interstate 195 east. Follow Interstate 195 east and exit on 25 east (follow signs to Cape Cod). Go over the Bourne Bridge then follow directions above.

Military Funeral Honors
Each committal shelter has a permanently installed digitized recording of TAPS that is played at each veteran's funeral.

The cemetery staff can provide families and funeral directors with names and telephone numbers of clergy, bagpipers and buglers in the area.

Floral arrangements accompanying the casket or urn at the time of burial will be placed on the completed grave. Natural cut flowers may be placed on graves at any time of the year. They will be removed when they become unsightly or when it becomes necessary to facilitate cemetery operations such as mowing. Water will be available at outside faucets from May 15 to September 1.

Containers such as pots, baskets, etc. are not authorized. Privately owned, permanent in-ground flower containers are not allowed.

Artificial flowers will be permitted on graves from Oct. 10 through April 15 and may be removed when their presence interferes with grounds maintenance. Potted plants will be allowed on graves for a period extending 10 days before through 10 days after Easter Sunday.

Christmas wreaths, grave pillows (3x2) and other seasonal adornments may be placed on graves from December 1 through January 20. They may not be secured to headstones or markers.

Massachusetts National Cemetery is located in Barnstable County on Cape Cod, approximately 65 miles southeast of Boston and adjacent to the Otis Air Force Base.

On June 18, 1973, Congress passed the National Cemetery Act which transferred 82 of the Army's national cemeteries to the Veteran's Administration (VA). The following year, the VA's National Cemetery System adopted the regional cemetery concept plan in which one large national cemetery would be built within each of the 10 standard federal regions, as established by the General Services Administration. A policy was also established that new cemeteries would only be created on land already owned by the federal government.

During the mid-1970s, when the National Cemetery System was looking to expand, it determined that the largest veteran population in the northeast was centered in the Boston area. A search soon commenced to find a suitable site for a national cemetery, nearby. The difficult task of locating land which would be available to the government at no cost eventually led to the identification of a 749-acre tract on the 22,000-acre Otis Air Force Base as the most likely site. The base occupied land that was leased to the Department of Defense (DOD). A portion of this lease was terminated and the title for 749.29 acres was transferred to the VA's National Cemetery System in 1976. The Otis tract became the first parcel of land acquired by the National Cemetery System for the specific purpose of building a new national cemetery since 1949.

Monuments and Memorials
Massachusetts National Cemetery has a memorial trail where, as of June 2013, 50 memorials placed in memory of veterans from World War I to the modern era.

Sergeant First Class Jared C. Monti (Afghanistan). Massachusetts native Jared C. Monti (1975-2006) graduated from Bridgewater-Raynham High School in 1994. He had joined the National Guard's delayed-entry program as a junior and at 18 completed basic training. Monti was deployed five times over twelve years. On his last mission, Monti was with the U.S. Army's 10th Mountain Division in Afghanistan. He was leading a 16-member intelligence-gathering team on June 21, 2006, when they encountered enemy fire. One of his soldiers was wounded, and Monti risked his own life twice to rescue him and died on a third attempt. President Barack Obama presented the Medal of Honor to Monti's family in 2009. He is buried in Section 11, Site 38.

Hospital Corpsman Richard David DeWert (Korea). He received the Medal of Honor posthumously for service in the U.S. Navy in recognition of courageous initiative rendering medical assistance and heroic self-sacrifice in Korea, April 5, 1951. His remains were returned to the United States in October and interred in Woodlawn National Cemetery in New York. When Massachusetts National Cemetery opened, his family requested his remains be reinterred in his home state which occurred on October 14, 1987, in Section 5, Site 167.

Massachusetts-born Melina Olive Shaw (nee Girard) was among the 233 "Hello Girls" who served in the U.S. Army during World War I — a status officially recognized only in the 1970s. Her French Canadian father was a physician and Olive likely learned French from his assistants. Both her parents died when she was a child, and she wed James Shaw in 1909 but the marriage was short-lived. Shaw may have studied at the Sorbonne before the war, but she was attending the New England Conservancy in 1918 when she applied for the bilingual telephone-operator position with the Army Signal Corps. After the war she worked for U.S. Congresswoman Edith Nourse Rogers. Private Shaw was one of eighteen living "Hello Girls" veterans honorably discharged in 1979 after 61 years. She died the following July and became the first interment at Massachusetts National Cemetery on October 14, 1980 (Section 1, Site 1).

Unknown United States Soldier. Interred on Aug. 4, 1990, in Section 5, Site 107. The remains were unearthed during highway excavation in South Carolina in the 1980s. He was identified as a member of the "Massachusetts Volunteer Infantry" by the buttons from his uniform. Additionally, six unknown Union soldiers interred June 10, 2006 in Section 14.