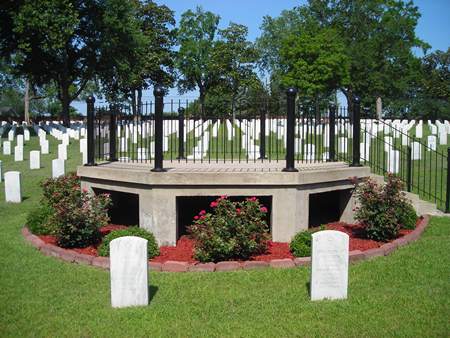 Raleigh National Cemetery is closed to new interments. The only interments that are being accepted are subsequent interments for veterans or eligible family members in an existing gravesite. Periodically however, burial space may become available due to a canceled reservation or when a disinterment has been completed. When either of these two scenarios occurs, the gravesite is made available to another eligible veteran on a first-come, first-served basis. Since there is no way to know in advance when a gravesite may become available, please contact the cemetery at the time of need to inquire whether space is available.

The cemetery is located in the southeast section of Raleigh. From Raleigh/Durham International Airport, travel Route 40 east to the Rock Quarry Road exit. Turn left and continue approximately 1.5 miles to the cemetery on your right.

Created as a planned city in 1792, the area now known as Raleigh, N.C., was a handful of sparse settlements as early as the 1760s. Enterprising landholders like Isaac Hunter and Joel Lane owned large tracts of farmland and operated taverns near their homes to accommodate travelers along the main north-south route cutting through central North Carolina. Wake Crossroads, as it was called, provided a foundation for Raleigh's development.

By the late 1780s, North Carolina's general assembly recognized the need for a permanent location to conduct state government. Prior to this, the state capital had been hosted by several existing cities. Rather than select one of these communities, the legislature decided to build a new and more-centrally located city. Eight commissioners were appointed to choose a location for the new capital. On March 30, 1792, they purchased 1,000 acres from Joel Lane and a plan was quickly developed.

The city grew slowly. The original state house, built in 1794, provided a physical location for government business and a center for the community's social life. Over time, a number of inns, taverns, dry-goods stores, coffin houses and brickyards were established to support the burgeoning city. Until the Civil War, these businesses catered mostly to retail customers. Fayetteville Street became Raleigh's commercial core as storefronts began to replace residences along the blocks south of the State Capitol. In addition to downtown commerce, a handful of mills and new ventures, such as the Raleigh & Gaston Railroad, completed the composition of the early city.

Raleigh emerged from the Civil War physically unscathed and a new era unfolded. An effort to establish cotton mills and other industries here failed. However, a plethora of family-owned businesses flourished and dominated the downtown. In the 19th century, Raleigh witnessed a wave of publishing enterprises from newspapers and printers to bookbinders. As the century progressed, innovations including the Raleigh Street Railway, a waterworks and electric lights fundamentally altered the city's way of life.

The cemetery, located in a relatively isolated area, contains a large Georgian Revival lodge and is defined by a masonry enclosure wall. Raleigh National Cemetery was listed on the National Register of Historic Places in 1997.

Monuments and Memorials
The Artillery Monument is a black, wrought iron cannon mounted on a cement pedestal donated in the late 1890s.

Sergeant First Class William Maud Bryant (Vietnam). William Maud Bryant was born in February 1933 and enlisted in the U.S. Army in 1955. Sergeant First Class Bryant served in Company A, 5th Special Forces Group, 1st Special Forces, and he re-enlisted as late as April 1968. Bryant was killed in action at Long Khanh Province on March 24, 1969. He was awarded the Medal of Honor posthumously for courage in combat and selfless regard for his comrades. Bryant is buried in Section 15, Site 1227.

Other Burials
North Carolinian Millie Dunn Veasey was born in 1918 and graduated from Washington High School in Raleigh. She enlisted in 1942 and joined the "six triple eight" battalion, the only all-female, all-black unit to serve overseas during World War II. Dunn arrived in Glasgow, Scotland, in early 1945 among the 800 or so "women in technicolor" who overcame prejudice serving in the Women's Army Corps – first stationed in Birmingham, England, then Rouen, France. Staff Sergeant Dunn was discharged in 1945. She married Warren Veasey in 1949, graduated from St. Augustine College in 1953, and became president of the local chapter of the NAACP (1965-1968). She was honored by the Congressional Black Caucus Foundation for her service and life-long advocacy of education and civil rights. Veasey died March 9, 2018, at age 100, and is buried in Raleigh National Cemetery (Section 21, Site 215).

More than half of VA's national cemeteries originated with the Civil War and many are closed to some burials. Other sites were established to serve World War veterans and they continue to expand. Historic themes related with NCA's cemeteries and soldiers' lots vary, but visitors should understand "Why is it here?" NCA began by installing interpretive signs, or waysides, at more than 100 properties to observe the Civil War Sesquicentennial (2011-2015). Please follow the links below to see the interpretive signs for Raleigh National Cemetery.