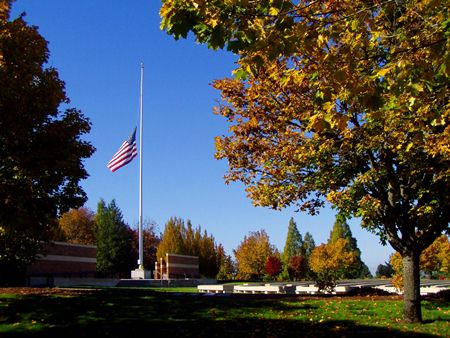 Rules of conduct: Picnicking, jogging, other recreational activities and the cutting or removal of cemetery plantings and shrubbery are prohibited. All pets are prohibited outside of vehicles. Unattended vehicles should be locked. Purses and valuables should be stored out of sight.

Military Funeral Honors
A contingent of the Oregon National Guard is currently assigned to the cemetery to perform full military honors on a first assigned, first served basis. Honor guards from local reserve components, veterans service and other organizations may be secured when the Oregon Honor Guard has been previously assigned or when requested by the next of kin.

During the mowing season, arrangements are removed from gravesites on a weekly basis or when they become withered and unsightly. The flower pickup schedule for cemetery sections is as follows:

Willamette National Cemetery is located about 10 miles southeast of Portland, Oregon, straddling the Multnomah and Clackamas County lines. As the result of lobbying efforts by several veterans’ organizations, Congress passed Public Law 388 authorizing the Secretary of War to establish a national cemetery in the Portland vicinity in 1941. Although President Franklin D. Roosevelt signed the bill into law, he felt that funds for the purchase of land should be limited to defense needs. As a result, no appropriation was made to build the cemetery.

At the conclusion of World War II, regional authorities again began urging the development of a national cemetery in Oregon. In 1949, the state donated approximately 102 acres and subsequent donations in 1952 brought the total land area to a little over 201 acres. Construction work started in 1950, and the area was officially designated Willamette National Cemetery on Dec. 14, 1950. The first burial occurred in 1951.

An additional 68 acres were dedicated in 1997 and include additional burial sections and columbaria. The latest addition to the cemetery was the 2011 purchase of 38 adjacent acres that are held for future development.

The American Veterans (AMVETS) donated a carillon to the cemetery in 1975.

Lieutenant Colonel Stanley T. Adams (Korea). He received the Medal of Honor while serving in the U.S. Army, Company A, 19th Infantry Regiment, for actions near Sesim-ni, Korea, February 4, 1951. Adams died in 1999 and is buried in Section H, Site 3623-O.

Specialist 4th Class Larry G. Dahl (Vietnam). He received the Medal of Honor posthumously for service in the U.S. Army, 359th Transportation Company, U.S. Support Command, in recognition of courageous disregard for personal safety that saved the lives of fellow soldiers at the cost of his own at An Khe, Binh Dinh Province, Republic of Vietnam, February 23, 1971. Dahl is buried in Section H, Site 3622-M.

Carson Lee Bigbee (1895-1964) was born in Oregon, the youngest of three boys. His parents were teachers and all three children were gifted athletes. Bigbee's comparatively small size and speed on the field earned him the nickname "Skeeter" in high school. Professional baseball teams took notice, but he followed his brothers to the University of Oregon. Skeeter Bigbee joined the professional leagues in 1916 and was picked up by the Pittsburgh Pirates. In the off-season, he worked in the Portland shipyards. He was drafted for military service in World War I, and joined the U.S. Army's Coast Artillery Corps, as a private, in 1918. After the war, he finished his professional baseball career with the Pirates in 1926 and he, and his family, made Portland home for many years. He died October 17, and is buried in Section T, Site 3269.