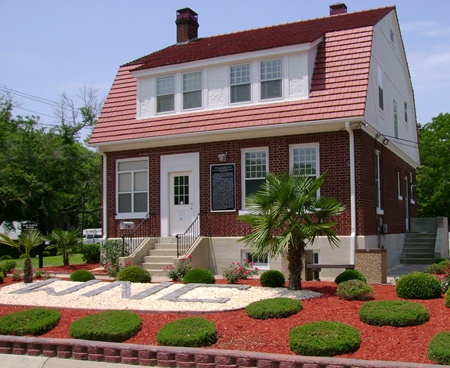 Wilmington National Cemetery is closed to new interments. The only interments that are being accepted are subsequent interments for veterans or eligible family members in an existing gravesite. Periodically however, burial space may become available due to a canceled reservation or when a disinterment has been completed. When either of these two scenarios occurs, the gravesite is made available to another eligible veteran on a first-come, first-served basis. Since there is no way to know in advance when a gravesite may become available, please contact the cemetery at the time of need to inquire whether space is available.

Cemetery is located approximately 20 blocks from the historic center of the City of Wilmington. From Wilmington International Airport, exit the airport on Airport Drive. Turn left on 23rd Street. Continue approximately two miles to Market Street. Turn right. Cemetery is three blocks on your right.

Military Funeral Honors
A funeral director will make arrangements for military funeral honors. When these arrangements have been made, please notify the cemetery representative.

Some telephone numbers that may be helpful in obtaining military funeral honors are:


The Department of Veterans Affairs and cemetery staff members do not exercise authority over the extent, content, or nature of honors and ceremonies furnished by the individual branches of the military service. Questions and inquires regarding these matters should be directed to the branch of service in which the veteran served.

During the Civil War, Wilmington harbor was one of the most significant importation depots for the South, and as such mines and underwater explosives protected it. In addition, the heavily armed Fort Fisher guarded the entrance to the harbor. Until the last few months of the Civil War, Fort Fisher kept the port of Wilmington open to blockade-runners supplying necessary goods to Confederate armies inland. Unlike older fortifications built of brick and mortar, Fort Fisher was made mostly of earth and sand, which was ideal for absorbing the shock of heavy explosives. By 1865, the supply line through Wilmington was the last remaining route open to Gen. Robert E. Lee's Army of Northern Virginia.

The Union army and navy planned several attacks on Fort Fisher and Wilmington, but made no attempt until Dec. 24, 1864. After two days of fighting and little headway, Union commanders concluded the fort was too strong and withdrew. However, they returned for a second attempt on Jan. 12, 1865, and for more than two days federal ships bombarded it from land and sea. Three days later, more than 3,300 Union infantry, including the 27th U.S. Colored Troops, attacked. After several hours of fierce combat, Union troops captured the fort. The Confederate army evacuated their remaining forts in the Cape Fear area and within weeks Union forces overran Wilmington. Once Wilmington fell, the Confederacy’s supply line was severed and the Civil War was soon over.

In 1867, land was purchased from a local Wilmington resident for the construction of a national cemetery. Most of the original interments were remains removed from the Wilmington City Cemetery, Fort Fisher, Fort Johnson and the surrounding area. An inspection dated May 13, 1870, reports 2,039 interments, including 698 known and 1,341 unknown graves marked by headboards.

Also buried in Wilmington National Cemetery are the remains of a group of Puerto Rican laborers who fell victim to the great influenza epidemic of 1918. On Nov. 14, 1918, the Wilmington Morning Star reported an outbreak of influenza on a ship docked in the Cape Fear River. The government vessel, City of Savannah, had arrived two days earlier carrying 1,900 Puerto Ricans to Fayetteville to aid in the construction of Camp Bragg. By the time the ship left Wilmington harbor, 28 of the Puerto Rican laborers had been buried at the national cemetery.
Wilmington National Cemetery was listed on the National Register of Historic Places in 1997.

Monuments and Memorials
Wilmington National Cemetery has no monuments or memorials.

More than half of VA's national cemeteries originated with the Civil War and many are closed to some burials. Other sites were established to serve World War veterans and they continue to expand. Historic themes related with NCA's cemeteries and soldiers' lots vary, but visitors should understand "Why is it here?" NCA began by installing interpretive signs, or waysides, at more than 100 properties to observe the Civil War Sesquicentennial (2011-2015). Please follow the links below to see the interpretive signs for Wilmington National Cemetery.