The National Cemetery Administration (NCA) is recognizing the historical impact of President Abraham Lincoln, especially his initiation of the national cemetery system, by restoring and introducing some of his most beloved words to these facilities just in time to celebrate the bicentennial of his birth in February 2009.

In July 1862, legislation was enacted authorizing the president "to purchase cemetery grounds . . . to be used as a national cemetery." This was the origin of all national cemeteries, including 75 established by 1872. The next year, on November 19, 1863, Lincoln gave the famed speech at the dedication of "Soldier's National Cemetery" in Gettysburg, Pennsylvania. An invitation to Lincoln to make "a few appropriate remarks" was almost an afterthought, but his 2-minute speech was the best-remembered event of the day and well beyond. 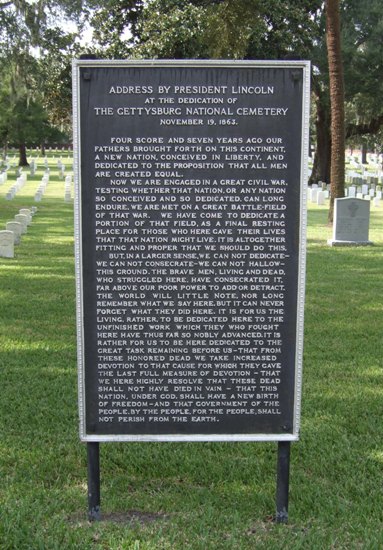 With funding provided through VA's Historic Preservation Office, the NCA History Program coordinated the acquisition of sixty-one (61) cast-iron tablets containing the Gettysburg Address, the most prominent historic tablet found throughout our 125 national cemeteries. The new tablets measure nearly 5 feet tall and 3 feet wide, and will be painted black and silver. They will be installed in older cemeteries where originals have been lost over the years, and in cemeteries developed after about 1950 that never had them. Delivery will start in February 2009, with the newest national cemeteries to receive tablets first.

The tablet at Rock Island National Cemetery, Ill., was used as the model for the new tablets being produced at the Army's nearby Rock Island Arsenal (RIA). It is no coincidence that NCA chose to partner with RIA, because it was exactly one century ago that the original tablets were manufactured there.

The Gettysburg Address as a permanent element of the cemetery landscape appears first in 1895 when legislation authorized a monument to Lincoln’s speech at the Soldiers National Cemetery; it also transferred the cemetery to the federal government as part of the nation’s fourth national battlefield park. That monument was not completed until 1912, but in the meantime the Army had begun producing a standard Gettysburg Address tablet for all national cemeteries. Starting by 1909, these were fabricated of iron, later “copperplated,” at RIA.

Assuring that each NCA national cemetery, old and new, displays the Gettysburg Address reflects the association of Abraham Lincoln's words and actions on these hallowed shrines. The tablets have been officially designated an "endorsed project" of the Abraham Lincoln Bicentennial Commission.

For more information go to: http://www.lincolnbicentennial.org