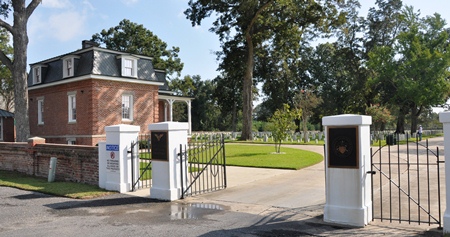 Port Hudson National Cemetery is located approximately seven miles west of Zachary, La., and about 20 miles north of the capital Baton Rouge. During the Civil War, control of the Mississippi River was critical to both Union and Confederate forces. The North sought control of the river to split the Confederacy in two; the South wanted to ensure the flow of supplies back and forth across the river. When New Orleans fell to Union troops in April 1862, Confederate control of the Mississippi was in jeopardy. The Confederate army had already fortified the river bluffs at Vicksburg, Miss., but it needed additional river batteries below the mouth of the Red River, which was the primary route for shipping supplies from Texas to the heartland of the Confederacy.

The bluffs near the small town of Port Hudson represented the perfect site for these batteries. They were the first high ground upstream from Baton Rouge and they overlooked a severe bend in the river — an additional obstacle for Union warships. Following their defeat at the Battle of Baton Rouge on Aug. 5, 1862, Confederate soldiers marched to Port Hudson and occupied the area 10 days later. They constructed a series of batteries along the bluffs and, in the months that followed, a 4.5-mile line of earthworks to protect the land-approach to the batteries.

On the morning of May 27, and again on June 14, the Union army launched ferocious assaults against the string of earthworks protecting Port Hudson. These actions constituted some of the bloodiest fighting in the Civil War. As the siege continued, the Confederates nearly exhausted their ammunition and were reduced to eating mules, horses and rats. When word reached Gardner that Vicksburg had surrendered, he realized that his situation was hopeless. Surrender terms were negotiated and, after 48 days and thousands of casualties, the Union army entered Port Hudson. This siege would become the longest in American military history.

Prior to the May 27 attack, Union leaders undertook a bold experiment. Two African-American regiments were chosen to participate in the battle. The 1st and 3rd Louisiana Native Guards proved their worth by pressing an attack against a well-fortified Confederate position. This action was applauded in northern newspapers and led to greater acceptance of African-American troops in the war effort. The garrison at Port Hudson became a recruiting center for black soldiers until it closed in summer 1866.

Port Hudson National Cemetery is located on the site where Union and Confederate forces were engaged in the siege of Port Hudson. Nearly 4,000 Union troops were killed and almost all were buried in the cemetery; only 600 were known. Approximately 500 Confederate soldiers died during the battle and were buried in the trenches where they fell. The present grounds were first used as a cemetery in 1863. In 1866, the federal government appropriated 8.4 acres and declared the site a national cemetery. Casualties of the siege of Port Hudson and soldiers who died in nearby military hospitals were interred here. In 1871, a cemetery inspector reported that the hostile adjacent-land owner would not permit a ditch to be run across his property to drain the cemetery.

The battlefield at Port Hudson is probably the only naturally preserved Civil War battleground extant. The breastworks, gun pits and trenches remain today almost as they were during the battle.

Port Hudson National Cemetery was designated a National Historic Landmark in 1974 as part of the Port Hudson Historic Site.

More than half of VA's national cemeteries originated with the Civil War and many are closed to some burials. Other sites were established to serve World War veterans and they continue to expand. Historic themes related with NCA's cemeteries and soldiers' lots vary, but visitors should understand "Why is it here?" NCA began by installing interpretive signs, or waysides, at more than 100 properties to observe the Civil War Sesquicentennial (2011-2015). Please follow the links below to see the interpretive signs for Port Hudson National Cemetery.