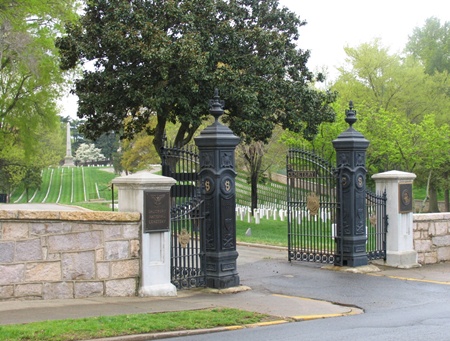 The historic section of Salisbury National Cemetery is located at 202 Government Road in Salisbury. This location only has space available to accommodate subsequent interments.

The Salisbury National Cemetery Annex, including the new administrative office and maintenance shop is located at 501 Statesville Boulevard in Salisbury, behind the William “Bill” Hefner VA Medical Center. The Annex has space available to accommodate full casket interments; in-ground cremated interments and will soon offer interment in the columbarium for cremated remains.

Some telephone numbers that may be helpful in obtaining military funeral honors are:

Salisbury National Cemetery was established by Confederate authorities to serve as the burial ground for captured Union soldiers incarcerated at the prison in Salisbury. The practice of prisoner exchange kept the prison populations down until 1864, when exchanges ended. By fall 1864, the number of soldiers at Salisbury prison doubled from 5,000 to 10,000. It suffered from one of the highest prison death rates, with as many as half the men dying of starvation or disease.

Recent historical research has led to a dispute over how many men are believed to have died during the last year or so of the war and are buried in the cemetery. The dead were buried in 18 trenches measuring about 240 feet long, located at the southeast end of the cemetery. Colonel Oscar A. Mack, the inspector of cemeteries, said in his report of 1870-71, "The bodies were placed one above the other, and mostly without coffins. From the number of bodies exhumed from a given space, researchers estimated that the number buried in these trenches was 11,700. The number of burials from the prison pen cannot be accurately known." The figure of 11,700 was accepted for many years. However, the actual number of burials is probably lower and it is doubtful we will ever know exactly how many unknown remains are buried there.

An estimated 3,000 to 4,000 soldiers were likely buried here after dying at Salisbury Prison. Even in the years immediately after the Civil War, the federal government was unable to verify the number of dead or compile a credible list of interments to a degree that would have allowed them to inscribe names on a single memorial or on individual headstones. The most accurate government-issued document associated with these burials is found in the Roll of Honor, No. XIV, compiled by the U.S. Army Quartermaster General’s Office, and published in 1868.

Access a transcription of the Salisbury records as published in Roll of Honor.

After the war this was designated Salisbury National Cemetery, and another 412 remains were relocated here from Lexington, Charlotte, Morgantown, and other places. The cemetery was dedicated in 1874, a wall was built around the perimeter the following year, and by 1876 the headstones and a monument were in place. Salisbury National Cemetery was listed on the National Register of Historic Places in 1999.

Monuments and Memorials
In June 1908, the state of Maine erected a 25-foot high granite monument topped by a soldier, to commemorate its soldiers who perished here.

The Federal Monument to the Unknown Dead is a granite obelisk that was commissioned by Congress in 1873. The government contracted Alexander McDonald of Mount Auburn, Massachusetts, to build the monument by Dec. 31, 1876. The monument, measuring 50 feet tall with a base of 18 feet, was built to honor the unknown soldiers who died in the Salisbury Confederate Prison.

The Pennsylvania Monument was erected in 1909, and stands 40 feet high on a granite base that is 20 feet by 20 feet. This monument was erected to commemorate the patriotic devotion, heroism and self sacrifice of the officers and soldiers of the Pennsylvania volunteers who died while confined as POWs in the Confederate military prison at Salisbury. Dedicated Nov. 16, 1910, according to speakers at the ceremony, the 736 men honored represent the largest number of Pennsylvania dead buried in any cemetery

The All Wars Monument is a cast-stone monument located near the flagpole, which contains plaques of each service designation (Army, Navy, Marine Corps, Air Force and Coast Guard). The Rowan County Veterans Council donated it on May 27, 1990.

A memorial in honor of the 4th Marine Division was erected in 2002.

Medal of Honor Recipients
Landsman Lorenzo Deming (Civil War), U.S. Navy, U.S. Picket Boat No. 1. Plymouth, North Carolina, October 27, 1864. Deming served on the U.S. Picket Boat No. 1 which was destroyed in action with the Confederate ram ALBEMARLE. He was incarcerated at the Confederate prison at Salisbury, and when he died February 8, 1865, he was likely buried in the trench as an unknown. He is honored with an older private memorial marker and a government-issued Medal of Honor headstone in Fairview Cemetery, New Britain, Connecticut.

Other Burials
Marshall C. Sharp (ca.1895-1946) was born in North Carolina and enlisted in the U.S. Army before 1914. He served in two regiments open to black enlisted men, the 9th U.S. Cavalry as a cook and in Company K, 10th U.S. Cavalry. In late 1919, Private First Class Sharp returned from the Philippine Islands where he was stationed with the 9th U.S. Cavalry, and in 1920, he was living on "enlisted men's row" at Fort Huachuca in Arizona, still in military service. Other tours of duty are unknown at this time, but Sharp is recognized as a Buffalo Soldier for his years in the segregated cavalry regiments. He was honorably discharged in 1923 and lived in Los Angeles, California, for the next twenty years working as a cook and laborer until his death on June 19. He is buried in Section A, Site 680.

More than half of VA's national cemeteries originated with the Civil War and many are closed to some burials. Other sites were established to serve World War veterans and they continue to expand. Historic themes related with NCA's cemeteries and soldiers' lots vary, but visitors should understand "Why is it here?" NCA began by installing interpretive signs, or waysides, at more than 100 properties to observe the Civil War Sesquicentennial (2011-2015). Please follow the links below to see the interpretive signs for Salisbury National Cemetery.