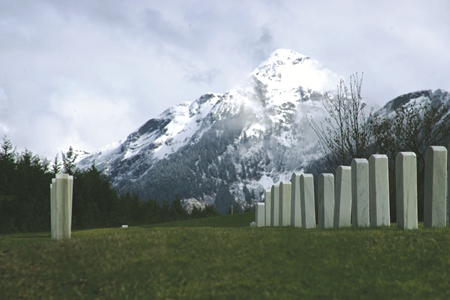 Burial area at Sitka National Cemetery with Mt. Verstovia in the background.

Christmas wreaths and other seasonal adornments may be placed on graves from Dec. 1 through Jan. 20. They may not be secured to headstones or markers.

The remote Sitka National Cemetery is located half a mile east of the center of town and is dominated by the natural beauty of the mountains and waters of Sitka Bay. The only access to Sitka is by air, marine highway or weekly ferry from Seattle, Wash.

The Kiksadi Clan of the Tlingit Indians had lived in and around Sitka for centuries before the Russians or Americans set foot on the island’s rocky shore. Choosing the seaward side of the island they named Shee, the Tlingits called their settlement Shee Atika, meaning "people on the outside of Shee." The name Sitka is a contraction of the term.

The Tlingits thrived undisturbed until 1799 when the Russians arrived. It wasn’t long after the Russians first discovered the region that Alexander Baron, manager of the Russian-American Co., established a fort a few miles north of present-day Sitka. The Tlingits grew suspicious, understanding that submission to the Russians meant allegiance to the Czar and providing slave labor to the fur trade company. These suspicions turned violent in 1802 when the Tlingits finally attacked the outpost and killed nearly all the Russians and their Aleut slaves.

The fur trade flourished and the Russian-American Co. became the most profitable fur trader in the world. By mid-century, however, over-hunting had diminished the number of sea otters and thereby the Russians’ interest in the new world. In 1867, the Russians sold Alaska to the United States for $7.2 million and a transfer ceremony took place in Sitka on October 18.

Although the U.S. flag first flew over Alaska in 1867, it was not until the1884 passage of the first Organic Act establishing the region as “a civil and judicial district” that Congress provided any form of government. During the 17 intervening years Alaska had been administered by the War Department, then the Treasury Department and finally by the Navy. None of these departments had any interest in local problems except the Army, which was responsible for keeping the Tlingits under control.

Gen. Jefferson C. Davis laid out the cemetery at Sitka in the late 19th century. Most of the interments were soldiers and sailors from the Marine base and Naval hospital. Subsequently, the land was loaned to the U.S. Department of the Interior as a home for indigent prospectors. From 1912 until 1921, the cemetery was practically abandoned and a dense growth of trees and underbrush grew up almost obscuring the site. In 1920, representatives of the Sitka American Legion post wrote to the Secretary of War calling attention to the neglected cemetery and asking for remedial action; they were told no funds were available. In 1921, they appealed to the Secretary of the Navy, who allocated $1,200 toward reconditioning the site.

In 1922, the Secretary of the Navy turned the issue of cemetery maintenance over to the War Department. In June 1924, upon the recommendation of the Alaska governor and the American Legion, President Calvin Coolidge signed an executive order designating the site Sitka National Cemetery. Since then, there have been several acreage modifications: in 1925, a revision of the executive order reduced the acreage from 3.98 acres to 1.19 acres; in 1957, Sheldon Jackson Junior College donated approximately one acre; a donation of 0.20 acres was made in 1959 by the Board of National Missions of the Presbyterian Church of the United States; and the Department of Interior transferred approximately two acres in the mid-1980s. Sitka National Cemetery currently encompasses 4.3 acres.

One of the more notable burials at Sitka is John Green Brady, governor of the Territory of Alaska from 1897 to 1906. Brady had come to Sitka as a Presbyterian missionary and later became commissioner and registrar of the Land Office, where he served until the president appointed him governor. He died in Sitka of a stroke on Dec. 17, 1918. In fall 1924, Brady’s wife returned to the territory and placed a large boulder over his grave.

There is a romantic legend attached to one headstone in the cemetery. During the days of military occupation, a captain and a lieutenant who were close friends both courted a Russian girl named Nadia. When Nadia indicated that she preferred the lieutenant, the captain appeared to accept his loss. Some time later both men left on a hunting trip together. After several hours, the captain staggered back to the village carrying the body of his companion. He said the lieutenant had accidentally shot himself. Subsequently, after trying again to win the heart of Nadia, the captain was found dead with a note under his body. The note explained that he had challenged the lieutenant to a duel and they used the hunting trip as an excuse. He had lost both Nadia and his best friend and no longer had the courage to live. The young lieutenant who died by the hand of his closest friend was one of the first burials at Sitka National Cemetery.

The cemetery was listed on the National Register of Historic Places on May 7, 2012.

Monuments and Memorials
Sitka has two cannons that serve as memorials to those interred at the cemetery.

Colonel Archie Van Winkle (Korea). He received the Medal of Honor while serving in the U.S. Marine Corps, Company B, 1st Battalion, 7th Marines, 1st Marine Division, for actions in the vicinity of Sudong, Korea, November 2, 1950. Van Winkle died in 1986 and is memorialized in Section Q, Site 10.

Other Burials
James Green Brady, Governor of the Territory of Alaska from 1897 to 1906. He came to Sitka as a Presbyterian minister, but later became commissioner and ex-officio registrar of the Land Office in 1884. He was interred in Section R, Plot 4 in December 1918. The monument at his grave bears the inscription: "A life ruled by faith in God and Man."

Charles W. Paddock (1900-1943) was born in Texas, but Pasadena, California, was home for most of his life. He graduated from the University of Southern California in 1922 and ran through existing school and world record times for short-distance races. He held records in the 100-metre and 200-metre, and 100-yard and 220-yard events through the 1920s, and in 1921 Paddock earned the nickname, "World's Fastest Human." He represented the United States in three Olympics – 1920, 1924, 1928 – medaling in the first two and retiring in 1929. Off the track he was a noted journalist and U.S. Army veteran of World War I. In 1942, Paddock was commissioned as a captain the U.S. Marine Corps and as an aide to Major General William Upshur in World War II. Both were killed in a plane crash near Sitka, Alaska, on July 23. Paddock is buried in Section Q, Site 7.