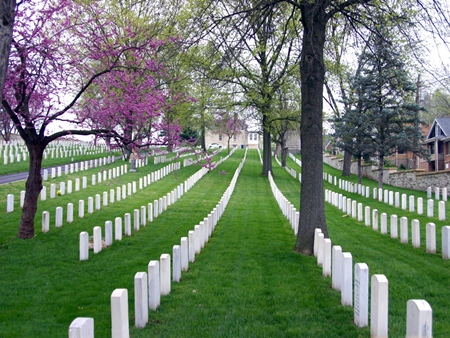 Jefferson City National Cemetery is closed to new interments. The only interments that are being accepted are subsequent interments for veterans or eligible family members in an existing gravesite. Periodically however, burial space may become available due to a canceled reservation or when a disinterment has been completed. When either of these two scenarios occurs, the gravesite is made available to another eligible veteran on a first-come, first-served basis. Since there is no way to know in advance when a gravesite may become available, please contact the cemetery at the time of need to inquire whether space is available.

The cemetery is approximately five miles west of Memorial Airport. From the airport, take Highway 54 turning left (west) across the bridge to Jefferson City. Take Highway 50 exit east and travel to Clark Avenue (five traffic lights). Exit on Clark Avenue and turn left (north) at the "T" intersection with a traffic light, turn left (west) on McCarty Street. Travel one block to the cemetery on your left.

Cemetery cannot be used as a picnic grounds

Visitors should not litter the grounds, cut, break or injure trees, shrubs or plants or otherwise conduct themselves in a manner not in keeping with the dignity and the sacredness of the cemetery.

All graves will be decorated on the workday immediately preceding Memorial Day with small U.S. flags, which will be removed on the first workday after Memorial Day. Flags are not permitted on graves at any other time.

Artificial flowers may be placed on graves only during the period of Oct. 10 through April 15. Plantings, statues, vigil lights, glass objects of any nature and any other type of commemorative items are not permitted on graves at any time. Potted plants will be permitted on graves 10 days before, through, 10 days after Easter Sunday and Memorial Day.

The region around Jefferson City National Cemetery has a rich and international history. French explorers Louis Jolliet and Jacques Marquette first surveyed the mouth of the Missouri River in 1673. In 1682, the French explorer René-Robert Cavelier, Sieur de la Salle, traveled down the Mississippi and claimed the extended area for France. In 1715, Antoine de la Mothe Cadillac opened a lead mine in present-day Madison County, Mo.; Philip Renault, another Frenchman, worked the mines in this area with slaves until 1744. In the mid 18th century the first two permanent white settlements, St. Genevieve and St. Louis, were carved out of the region. Soon after 1789, the Spanish built the El Camino Real (the King’s Highway) northward from New Madrid to St. Louis. It is still used today, designated as U.S. Highway 61.

In the early 1810s, Jefferson City, then known as Lohman’s Landing, became an increasingly important trading post for immigrants beginning their westward journey on the Santa Fe and, later, Oregon trails. As part of a compromise plan between major population centers in the eastern and the western portions of the state, Jefferson City was chosen as the capital in 1821 and the legislature began to meet there five years later. In 1839 the site was incorporated as a city.

During the Civil War, the city’s sentiments were divided between North and South. Jefferson City, however, saw little military action with one exception. On Sept. 27, 1864, a guerrilla force commanded by William Anderson burned a train and killed 17 Union soldiers and several civilian passengers. Many of the soldiers had been wounded on the battlefield and were returning home. Later that day, a federal force followed Anderson and his men to their camp where a bloody battle took place. The Union troops were routed and forced to retreat. Almost 10 years later, the remains of the men who had died in the skirmish were reinterred in Jefferson City National Cemetery.

Burials in Jefferson City National Cemetery date to summer 1861; its original purpose was for the burial of Civil War soldiers from the surrounding area. The site of the cemetery, which local residents Israel and Mary Read sold to the government, was surveyed for classification as a national cemetery during the war. However, its official designation did not occur until 1867, after the war and approximately 350 interments were completed.

Jefferson City National Cemetery was listed on the National Register of Historic Places on Oct. 1, 1998.

Monuments and Memorials
The 39th Regiment Monument of Centralia, Mo., was erected around 1868. It commemorates members of Companies A, G and H of the 39th Regiment of the Missouri Volunteer Infantry who were killed in action at Centralia on Sept. 27, 1864. The monument marks the trench burial of the 118 men interred there.

More than half of VA's national cemeteries originated with the Civil War and many are closed to some burials. Other sites were established to serve World War veterans and they continue to expand. Historic themes related with NCA's cemeteries and soldiers' lots vary, but visitors should understand "Why is it here?" NCA began by installing interpretive signs, or waysides, at more than 100 properties to observe the Civil War Sesquicentennial (2011-2015). Please follow the links below to see the interpretive signs for Jefferson City National Cemetery.