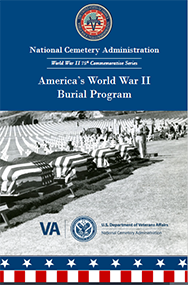 America's World War II Burial Program
This National Cemetery Administration (NCA) publication is the first in a series on topics related to World War II, and it coincides with the 75th anniversary of the end of the war. It tells the story of how service men and women who perished abroad were repatriated between 1947-1951—about 20 percent to VA national cemeteries—as well as the essential features of these properties. 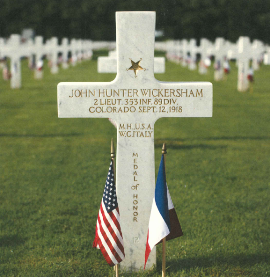 The National Cemetery Administration (NCA) History Program has released two educational products based on research completed for the sesquicentennial of the Civil War, 2011-2015. Interpretive signs on site explore local military activity, why soldiers are buried here, Medal of Honor recipients, memorials and more. While much has been written about honoring the Union dead, until now little documentation was assembled about Confederates who died as POWs and whose graves are managed by the U.S. government. Both books support the NCA Veterans Legacy Program, begun in 2014. 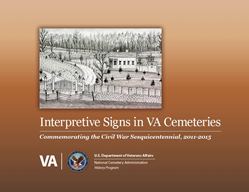 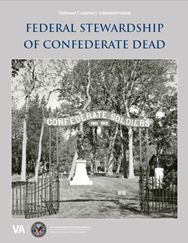 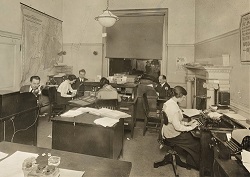 Teaching with Historic Places (TwHP) Lesson Plans is a component of the National Register of Historic Places, which helps develop guidance on using historic places to teach and encourages educators, historians, preservationists and others to work together effectively. Three NCA properties are the subject of TwHP lesson plans:

"A Nation Repays Its Debt: The National Soldiers' Home and Cemetery in Dayton, Ohio" (Dayton National Cemetery)
"Not to Be Forgotten: Camp Chase Confederate Cemetery"
Comfortable Camps?" Archeology of the Confederate Guard Camp at the Florence Stockade (This lesson was developed as part of mitigation associated with NCA's expansion of Florence National Cemetery.)

A program of the National Park Service, this series consists of travel guides to historic destinations around the country, all listed on the National Register of Historic Places. VA's oldest properties are the subject of two itineraries:

In 2017 NCA's History Program joined the Virtual Student Federal Service (VSFS) e-Internship program offered through the U.S. Department of State to work with undergraduate and graduate students in public history programs. We continue to host virtual interns who research aspects of burial and memorial benefits, notable burials, and veteran memorialization that complements their studies. Each year new topics and products result in findings that support NCA's commitment to exploring the history of the National Cemetery system and making the information digitally accessible.

Monumental Minnesota
Rostrums Over the Years

In 2018 three students from Concordia College (Moorhead, MN), Michigan State University (East Lansing, MI), and New York University (New York, NY) explored special populations associated with the national cemeteries. Like Civil War veterans before them, some World War I veterans continued to service with the Quartermaster Corps as a civilian, earning a livelihood as a cemetery superintendent. During and after World War II, superintendents oversaw the burials of foreign nationals who died in the United States as prisoners of war and the final disposition of American war dead repatriated from overseas cemeteries, respectively. They researched War Department decisions that impacted who was buried where, and why, in VA national cemeteries in the 1940s. The legacies of those decisions are intertwined and collectively they offer insights into the inter-world war period.

NOTE: Page may contain links that will take you away from the Department of Veterans Affairs website.