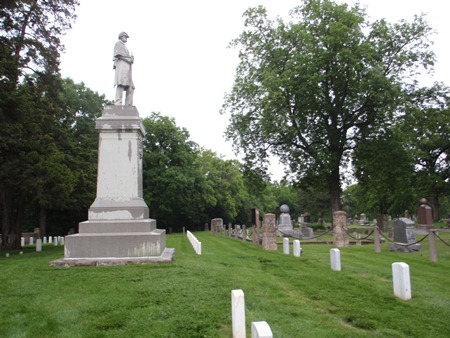 This soldiers' lot is overseen by the Leavenworth National Cemetery.

The Mound City Soldiers' Lot is located in Lots 262 and 263 of Woodland Cemetery at Mound City, Kansas, which set aside the area for the burial of soldiers. The first interments consisted of 30 Union soldiers killed in the Battles of Mine Creek and Marais des Cygnes in 1864. The deed for the soldiers' lot, measuring 48 by 158 feet, was not officially transferred until 1874. In 1888, the remains of other Union and unknown soldiers buried elsewhere in Linn County were re-interred into the soldiers' lot. In 1940, laborers of the Works Progress Administration (WPA), a depression-era work relief program, erected an enclosing stone wall and post-and-chain fence around the perimeter of the soldiers' lot.

Monuments and Memorials
In 1889, the United States erected the Union Soldiers monument to honor the 80 Civil War soldiers laid to rest at Mound City Soldiers' Lot. The granite monument, which cost approximately $2,500, depicts a Civil War infantryman holding his musket, looking to the east.

An artillery monument was placed in the soldiers' lot circa 1880.

The Linn County Historical Society erected a wooden memorial at the entrance of the soldiers' lot at some point during the 20th century. This memorial, which signified the soldiers' lot within the larger cemetery, was replaced with a limestone version in 2001.