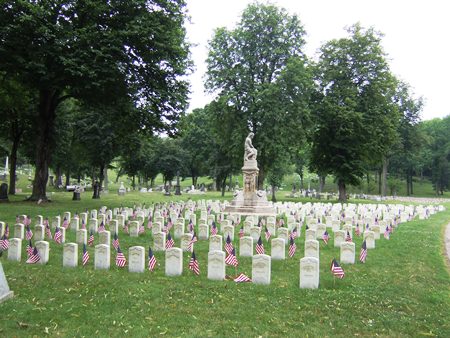 This cemetery is closed for interments.

This cemetery is overseen by the National Cemetery of the Alleghenies. Please contact the cemetery at 724-746-4363 for more information.

Allegheny Cemetery in Pittsburgh, Pennsylvania, is among the oldest rural cemeteries in the United States. Forty of the most prominent citizens of the city — merchants, manufacturers, professionals and politicians — chartered the non-profit cemetery on April 24, 1844. The group purchased the first 100 acres for the cemetery for $50,000. Today the cemetery is composed of approximately 300 acres, in which about 120,000 persons are interred.

The soldiers' lot is located in Section 33, lot 66, and consists of 303 individual interments. While most of the burials are Union Civil War soldiers, the lot also includes 15 Confederates and a small number of Spanish-American War veterans.

Soldiers were originally interred in two places within Allegheny Cemetery: the plot donated to the federal government by the cemetery association, and the “stranger's field," also known as the “potter's field," an area for the poor. It is likely that all the remains were consolidated into the soldiers' lot in the 1870's.

Allegheny Cemetery, including the National Cemetery Administration's soldiers' lot, was listed on the National Register of Historic Places in December 1980.

Monuments and Memorials
Following the Civil War, the Allegheny County Ladies Memorial Association commissioned local artist Fred Mayer to sculpt a monument for the soldier's Lot. Erected in 1876, the 16-foot-tall limestone monument was dedicated in memory of those who died during the Civil War. The figure of a woman holding a wreath with her head bowed sits atop the monument, with four sculpted cannons located on the monument base. Two small cannons mounted on concrete bases mark the front of the soldiers' lot.

Corporal John M. Kendig (Civil War). He received the Medal of Honor while serving in the U.S. Army, Company A, 63rd Pennsylvania Infantry, for actions at Spotsylvania, Virginia, May 12, 1864. His citation was awarded under the name of Kindig. He died in 1869 and is buried in Section 33, Lot 66, Site 32.

More than half of VA's national cemeteries originated with the Civil War and many are closed to some burials. Other sites were established to serve World War veterans and they continue to expand. Historic themes related with NCA's cemeteries and soldiers' lots vary, but visitors should understand "Why is it here?" NCA began by installing interpretive signs, or waysides, at more than 100 properties to observe the Civil War Sesquicentennial (2011-2015). Please follow the links below to see the interpretive signs for Allegheny Soldiers' Lot.