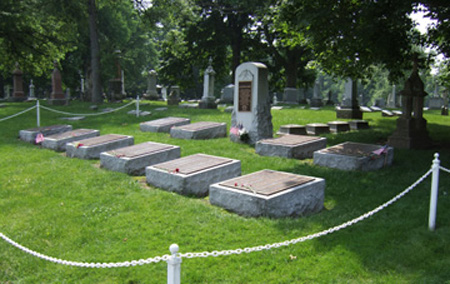 This Confederate Plot is closed to interments.

This plot is overseen by Marion National Cemetery.

The Crown Hill Cemetery Confederate Plot was established in 1931 as a memorial and burial place for 1,616 unknown Confederate Soldiers. Most of the soldiers interred here died at Camp Morton, a Union prison on the north side of Indianapolis. Between 1862 and 1865, at least 9,000 Confederate prisoners passed through the gates of Camp Morton. Initially, deceased prisoners were interred in the nearby Greenlawn Cemetery. In 1912, the federal government erected an imposing, 27' tall Confederate monument in Greenlawn Cemetery, featuring the names of persons who perished at Camp Morton. However, Greenlawn Cemetery closed in 1928, and the Confederate monument was relocated to the city's Garfield Park to make it more visible to the public. Five years later, the remains of the Confederate soldiers were moved to Crown Hill Cemetery, and placed in a mass grave. On top of the mound a new granite monument was erected, commemorating the unknown Confederate dead.

Crown Hill Cemetery, including the Confederate Plot and the nearby Crown Hill National Cemetery - established for the Union dead - was listed on the National Register for Historic Places in February 1973.

Monuments and Memorials
The original inscription on the 6' tall granite monument erected on the site in 1933 read: "Remains of 1616 Unknown Confederate Soldiers who died at Indianapolis while Prisoners of War." In 1993, a local effort led to the rededication of the site, which included a modification of the original monument. Today, a bronze tablet on its base reads: "Confederate Mound: These Confederate soldiers and sailors died at Indianapolis while prisoners of war. They were transferred here from Greenlawn Cemetery in 1933 to rest eternal. A large monument to these dead now stands in Garfield Park, Indianapolis, Indiana." In addition, ten bronze tablets on granite bases were placed nearby, which contain the names of the Confederate dead believed to have been re-interred here.

More than half of VA's national cemeteries originated with the Civil War and many are closed to some burials. Other sites were established to serve World War veterans and they continue to expand. Historic themes related with NCA's cemeteries and soldiers' lots vary, but visitors should understand "Why is it here?" NCA began by installing interpretive signs, or waysides, at more than 100 properties to observe the Civil War Sesquicentennial (2011-2015). Please follow the links below to see the interpretive signs for Crown Hill Confederate Plot.