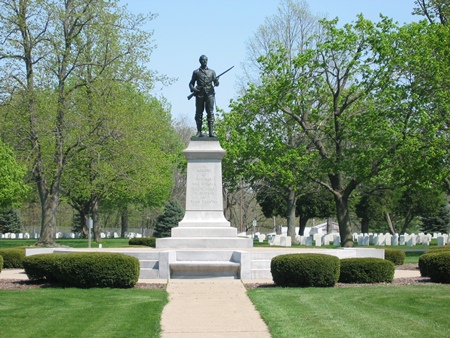 Christmas wreaths, grave blankets and other seasonal adornments may be placed on graves from Dec. 15 through Jan. 20. They may not be secured to headstones or markers.

Permanent plantings, statues, vigil lights, breakable objects and similar items are not permitted on the graves. The Department of Veterans Affairs does not permit adornments that are considered offensive, inconsistent with the dignity of the cemetery or hazardous to cemetery personnel. For example, items incorporating beads or wires may become entangled in mowers or other equipment and cause injury.

Danville National Cemetery is located in Vermilion County, Ill., at the eastern side of the VA Illiana Health Care System. This area once belonged to the Miami, Kickapoo and Pottowatomie tribes of the Algonquin Indians. Salt deposits located on the Vermilion River attracted a variety of wildlife that served as a constant food supply for the local Native Americans; they later attracted the first white settlers to the region. In 1818, the Kickapoo ceded a large area of land to the federal government, including what is now Vermilion County. In the mid-1800s, coal miners settled in the Danville area, and soon the region ranked as Illinois’ top coal producer. From 1841 to 1859, Abraham Lincoln practiced law in Danville; in 1852, he established a law practice with Ward Lamon. This was Lincoln’s only permanent law office in the Illinois circuit.

Although no Civil War battles occurred here, many men from Danville volunteered for the Union. The men who returned home were often sick, wounded or disabled. In 1897, Congress authorized the establishment of the National Home for Disabled Volunteer Soldiers in Danville. The next year, a small plot of land was set aside as a burial site; it was subsequently designated a national cemetery in 1898. In 1901, the present cemetery was plotted and the remains of those buried in the old cemetery were reinterred at the new site.

Monuments and Memorials
The Soldiers Monument at Danville National Cemetery was dedicated on Memorial Day in 1917. The monument consists of a granite base topped by a bronze life-sized figure depicting a young Civil War soldier holding his musket. Clark Noble was the sculptor.

Lieutenant Morton A. Read (Civil War). He received the Medal of Honor while serving in the U.S. Army, Company D, 8th New York Cavalry, for actions at Appomattox Station, Virginia, April 8, 1865. Read died in 1921 and is buried in Section 10, Site 3033.