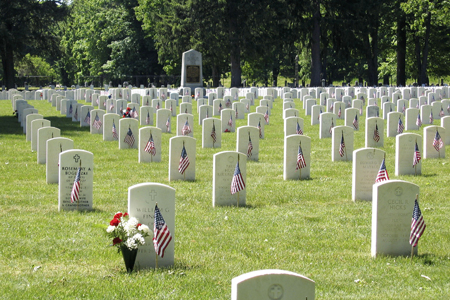 This cemetery has space available for cremated remains in a columbarium only.

Cemetery is located in Chemung County, Elmira, N.Y., next to Woodlawn City Cemetery. Take Interstate 86 to Exit 52B, Route 14 South, Elmira Heights. Follow Route 14 South for approximately two miles until you come to a Y in the road. Bear right at the Y. Follow Oakwood Avenue. After one mile Oakwood Avenue will change to Davis Street. Follow Davis Street. The cemetery will be on your right.

A gravesite locator is located to the right of the office door.

Military Funeral Honors are organized under the Department of Defense and should be arranged by the funeral director. In the event there is not a funeral director involved in making arrangements please refer to the telephone numbers listed below or contact your local American Legion or VFW.

Christmas wreaths, grave blankets and other seasonal adornments may be placed on graves from Dec. 1 through Jan. 31. They may not be secured to headstones or markers.

Woodlawn National Cemetery is located in Elmira, N.Y., in Chemung County. In 1861, the town was both a training and marshalling center for Union soldiers during the Civil War. As trainees were eventually assigned to military units and the barracks emptied, the federal government used the buildings as a prisoner-of-war camp. Originally known as Camp Rathbun, and designated Camp No. 3 during its existence from summer 1864 until the end of the war, this camp housed approximately 12,000 Confederate enlisted men. Approximately 3,000 men died here.

Confederate POWs were transported by rail from locations such as Point Lookout, Md., and Old Capital Prison in Washington, D.C., to Elmira. Upon arrival, most of the captives were in poor physical condition, which was only exacerbated by their incarceration. While the weather was mild during summer and fall, in its first year approximately 900 prisoners were without housing until early January. Prison records show that men died from typhoid fever, dysentery and pneumonia, as well as malnutrition. The Confederates lacked adequate rations and medical care thanks to insufficient medical supplies. Prisoners infected with smallpox were often moved to a remote location and forgotten. It was not uncommon to see a frozen body lying outside a tent waiting to be loaded for transportation to the cemetery. Another contributing factor to the problem of disease was a stagnant pool known as Foster’s Pond. This pond stood between the camp and the river.

Each day, deceased soldiers were placed in coffins and loaded on a buckboard wagon, up to nine at a time. The wagons traveled approximately a mile and a half to the cemetery, where a long trench was dug and the coffins placed in it side by side. At the time of the Confederate burials, John Jones, an escaped slave who found freedom in Elmira, was the sexton of Woodlawn Cemetery. He kept a meticulous record of each Confederate burial so that when, in 1907, the federal government was authorized to erect a small marble headstone at each grave, it was possible to inscribe them with the soldier’s name, company regiment and grave number.

Beginning in February 1865, prisoners who swore allegiance to the Union were deemed eligible for release. Groups of approximately 500 men were allocated food rations, money and/or transportation vouchers and placed on a train bound for the major Union army supply depot in City Point, Va., where arrangements were made for the final trip home.

Soldiers who survived were released in groups at the end of the war and provided the same assistance. Approximately 140 went to the regional army hospital in Elmira where they were treated until fit to travel. Seventeen of them never recovered and died in New York. By the end of 1865, the camp was fully closed and all buildings razed or moved to nearby locations.

Woodlawn National Cemetery was listed on the National Register of Historic Places on Oct. 6, 2004.

Monuments and Memorials
The United States government erected the Shohola Monument in 1911 to commemorate a tragic railroad accident that took the lives of both Confederate and Union soldiers during the Civil War. Starting in 1906, the government began a program to mark the graves of Confederate prisoners of war and this monument was one of the earliest monuments to be erected. One side of the Shohola monument honors 49 Confederate prisoners of war who were killed in the accident. According to 1864 newspaper accounts of the accident, the Confederate soldiers killed were among 853 Confederate prisoners being transported by train from the prison camp at Point Lookout, Maryland, to Elmira, New York, in July 1864. The 18-car passenger train which carried the prisoners of war was hit by a 50-car coal train on July 15, 1864. A total of 64 Confederate and Union soldiers were killed, along with the passenger train's engineer, 2 firemen, and a brakeman. One hundred and twenty other passengers were wounded. The other side of the Shohola monument commemorates the 17 Union guard sentinels - all privates of the 11th Veteran Reserve Corps - who accompanied the prisoners enroute to Elmira. Original burial location for the dead was in a trench near the accident site. They were later reinterred at Woodlawn National Cemetery and their individual remains were unidentifiable.

In 1937, the United Daughters of the Confederacy erected a monument in memory of those Confederate prisoners of war who died while imprisoned at Elmira and who are buried at Woodlawn National Cemetery. The bronze figure and granite monument overlooks the entire length of the Confederate area, facing eastward.

On Aug. 13, 1988, the Chemung County Veterans dedicated a monument in memory of all veterans from New York and Pennsylvania. The granite and bronze plaque memorial features military insignia from all five branches of the military.

More than half of VA's national cemeteries originated with the Civil War and many are closed to some burials. Other sites were established to serve World War veterans and they continue to expand. Historic themes related with NCA's cemeteries and soldiers' lots vary, but visitors should understand "Why is it here?" NCA began by installing interpretive signs, or waysides, at more than 100 properties to observe the Civil War Sesquicentennial (2011-2015). Please follow the links below to see the interpretive signs for Woodlawn National Cemetery.