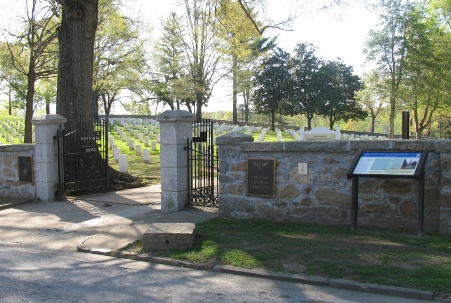 Office Hours: This cemetery is administered by Salisbury National Cemetery.

Travel Route 360 from Richmond to Danville. Travel Route 86 South, then turn left onto Industrial Drive and left again on Jefferson Avenue. Turn right on Lee Street to cemetery on your right.

The Salisbury National Cemetery administers this cemetery. Please contact them at the telephone number listed above.

During the Civil War, Danville was an important railroad center. A great number of recruits, supplies and war materiel were transported to Danville to provision the Army of Northern Virginia. As an important transportation hub, Danville was also the logical site for a Confederate prisoner-of-war camp.

Once the Civil War began, the Confederates found themselves with large numbers of Union prisoners captured in the Battle of Manassas. These POWs were then transported to Richmond, where they were initially housed in facilities such as Ligon's Warehouse and Tobacco Factory and many others like it. However, to reduce the high prison population in the Confederate capital, hundreds of Union POWs were relocated to six tobacco warehouses in downtown Danville, Va. Today, at 300 Lynn Street, Civil War Prison No. 6 still stands. It is a brick structure, originally built for Major William T. Sutherlin in 1855. These six facilities held just over 7,000 officers and enlisted men, 1,400 of whom died of such scourges as smallpox and dysentery brought on by starvation.

By 1864, the South’s resources were disastrously depleted due to General William T. Sherman's successful destruction of the railroads. With no access to supplies of food, clothing and munitions, the civilian population of Richmond could no longer feed and cloth themselves, let alone their soldiers. To eliminate the drain on these limited resources, thousands of Union prisoners — mostly officers — were sent to the Danville prison. In winter 1864-65, there were 2,400 prisoners of all ranks living here in overcrowded conditions.

Danville National Cemetery was established in December 1866 on 2.63 acres, about a mile from the railroad station. With the exception of the remains of four soldiers from the Sixth Army Corps, all original interments in the cemetery were Union POWs who died in the prison. The principal cause of death was disease. Many of the bodies of Union Soldiers who died in Danville’s prisons were buried in mass graves. These graves were later exhumed and the bodies buried beneath individual markers.

Danville National Cemetery was listed on the National Register of Historic Places in 1995.

Monuments and Memorials
Danville National Cemetery has no monuments or memorials.