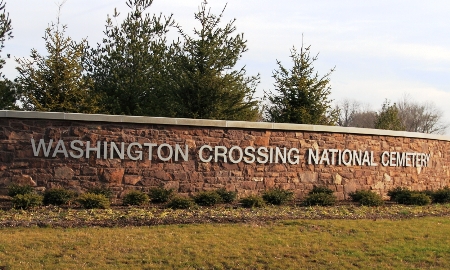 The new 205-acre national cemetery in southeastern Pennsylvania will serve veterans' needs for the next 50 years. The cemetery is located in Bucks County, north of the city of Philadelphia, about three miles northwest of Interstate 95, and less than three miles from Washington Crossing Historic Park.

In January 2008, VA awarded a design contract to Cairone & Kaupp, Inc. of Philadelphia. VA plans on completing a 12-acre early burial area with temporary facilities (Phase 1A) followed by the second construction stage of the project (Phase 1B). When completed, the 64-acre Phase 1 development will provide 15,500 full casket gravesites, including 15,100 pre-placed crypts, and 6,500 in-ground cremation sites and 4,100 columbarium niches. The new cemetery will also include an administration and public information center complex and public restrooms, a maintenance facility, a cemetery entrance area, a flag assembly area, and committal shelters for funeral services. Other infrastructure design elements include roadways, landscaping, utilities, and irrigation.

In 1681, King Charles II of England granted a sizable piece of his land holdings in America to William Penn to satisfy a debt owed to the Penn family. The next year, Penn established the three original counties in the Pennsylvania Colony, including Bucks County. Immigrants, primarily from the British Isles and Germany, arrived and settled on small farms, producing potash, wheat, salted pork and other products.

During the Revolutionary War, in the summer and fall of 1776, General George Washington's Continental Army suffered a series of losses in New York and New Jersey. By December, the British offensive forced General Washington and his troops to withdraw into Pennsylvania and decamp in Bucks County. The general was in desperate need of a military victory to resuscitate the morale of his army and the American public.

General Washington suspected that the British were complacent after their successes, and sought an offensive maneuver that might catch them off guard. On the night of December 25-26, 1776, Washington led his troops across the Delaware River in the first movement of a surprise attack against Hessian forces in British service. The Continental Army won the subsequent Battle of Trenton and provided the Americans with a much-needed victory.

The Delaware River crossing was more than a strategic triumph. It grew to symbolize both Washington's heroism and the resiliency of the burgeoning republic at one of the darkest hours of the revolution. German artist Emmanuel Leutze depicted this momentous event in his 1849 painting Washington Crossing the Delaware, to inspire supporters of democracy and greater political representation in Germany in the aftermath of the unsuccessful Revolutions of 1848. The idealized and historically inaccurate scene has become an iconic depiction of the crossing; copies hang in the White House and the Metropolitan Museum of Art in New York.

The character of Bucks County continued to be primarily agricultural throughout the 19th century and into the next, with pockets of industrial activity near the Delaware River. Suburbanization accelerated after World War II as the economy expanded, automobile ownership increased, and the extension of the Pennsylvania Turnpike stimulated local housing construction. Levittown, an early subdivision developed by the pioneering suburban developer Levitt & Sons, is located in the southern part of Bucks County. In 1951, U.S. Steel opened a mill in Bucks County, which sparked even more growth.

Today, Bucks County is suburban in areas nearest to the Delaware River. The northern region is more pastoral, and is popular with tourists in search of natural scenery, historic covered bridges, and the location of General Washington's crossing.

Washington Crossing National Cemetery is located approximately three miles southwest from the location where General Washington crossed the Delaware River. The cemetery is located on land that William Penn deeded to Euro-American settlers in 1698, and was used as farmland for centuries. In 2008, the Department of Veterans Affairs purchased the property from Dolington Land, L.P., a subsidiary of the homebuilding company Toll Brothers. The cemetery was formally dedicated in 2009 and opened for burials the following year. Washington Crossing National Cemetery is the fourth national cemetery established in Pennsylvania and the 131st in the national cemetery system.

Georgian Mildred J. Dalton (1914-2013) graduated from Grady Memorial Hospital School of Nursing and was head surgical nurse there before joining the U.S. Army. She served in the Army Nurse Corps from 1939 to 1946 at Fort Benning, then in the Philippine Islands. Already in the Pacific when the United States entered World War II, Dalton tended the wounded on the Bataan Peninsula. In May 1942 she was among 66 army nurses captured at Corregidor and sent to Santo Tomas prison camp. Despite being malnourished captives themselves, the nurses treated thousands of prisoners until Allied troops liberated them. Dalton was awarded the Bronze Star and promoted to first lieutenant. She participated in a war bond campaign to end her tour, where she met her husband, Arthur Manning. By the time of her death, Manning was known as the last "Angel of Corregidor." She is buried in Section 6, Site 1270.