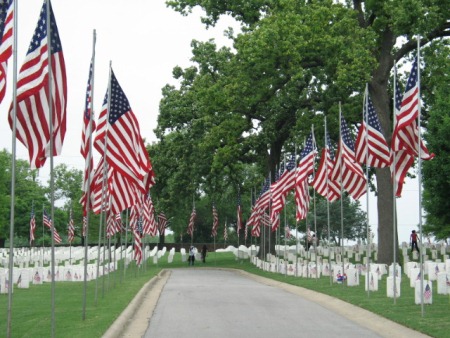 Fort Smith National Cemetery is located in Sebastian County, Arkansas. Fort Smith has played an important role in the expansion and development of the United States. By the early 19th century more and more white settlers were moving into the territory acquired through the Louisiana Purchase of 1805. Tensions with the local Native Americans increased as both groups competed for space and resources. To ensure the safety of the settlers, the U.S. Army established a string of military posts along the western frontier. Fort Smith was the first and westernmost of these.

On Christmas Day 1817, General William Bradford and his men arrived on the point of land just below the confluence of the Poteau and Arkansas rivers, where they began constructing a stockade fort sufficient for one company. Within a few years of its establishment, additional troops were garrisoned to maintain peace and prevent hostilities between the Cherokee and the Osage. However, 50 men (about 25 percent of the command) died in 1823, with forty-four of the deaths occurring during the summer months. Despite its strategic importance the Army closed the fort in 1824. Doors, windows, and all other movable equipment at Fort Smith were transported to Fort Gibson for use in the construction of that post.

The first cemetery at Fort Smith was most likely established during this period. A newspaper article published in 1841 suggests there was a dilapidated burial ground outside of the stockade containing three graves marked by marble slabs. This cemetery may have been established in 1819 at the time of, or just prior to, the death of the Fort Smith surgeon Thomas Russell.

In 1838 the Army permanently returned to Fort Smith with the arrival of Company F, 7th U.S. Infantry. A new garrison was constructed, including an officers’ log house where General Zachary Taylor lived from 1841 until 1845. In addition, the original post cemetery was rehabilitated and enlarged. On April 23, 1861, at the onset of the Civil War, Fort Smith was evacuated and Confederate forces occupied the garrison. By May of that year, the Arkansas legislature had ceded the fort to the Confederate States of America. During the War Between the States more than 400 Confederate soldiers were buried at Fort Smith, including Generals James B. McIntosh and Alexander E. Steen.

On Sept. 1, 1863, Union troops were able to retake Fort Smith and it remained in Union hands for the rest of the war.

In 1867, the old post burial ground was elevated to a national cemetery consisting of about five acres enclosed by a white-washed fence. Many military dead were removed from battlefields and private cemeteries and reinterred here. So many, in fact, that when the Fort Smith military reservation closed in 1871, President Grant ordered that Fort Smith National Cemetery be reactivated by the War Department and remain open for the purpose of future military burials.

Probably the most famous interment at Fort Smith is Isaac C. Parker, better known as the "Hanging Judge." Parker was born in 1838 in Ohio and began practicing law in 1859; during the Civil War he was a corporal assigned to the 61st Missouri Infantry. After the war, Parker became a judge for the 12th Circuit of Missouri and was elected to Congress twice. In 1875, President Grant appointed him U.S. District Judge for the Eastern District of Arkansas. At the relatively young age of 37, Parker found himself responsible for a 74,000-square-mile area. In his 21 years in this position, Parker sentenced 151 men to death by hanging (of these, 83 were actually executed). In a territory noted for its lawlessness, his harsh but effective administration helped make the settlement of the West possible. On Nov. 17, 1896, two months after Judge Parker was removed from office due to a movement toward the establishment of local courts, he died and was buried at Fort Smith National Cemetery.

Also buried at this cemetery is Fort Smith-native Brigadier General William O. Darby, who organized and commanded the First Ranger Battalion, or "Darby’s Rangers". The highly-decorated Col. Darby was killed in Italy’s Po Valley only days before the end of World War II in Europe; he was posthumously promoted to the rank of Brigadier General.

The once-small cemetery at Fort Smith has been expanded several times over almost 200 years and today totals 32 acres. Many of the private monuments in the national cemetery face west, in the opposite direction of government furnished headstones. This is in accordance with a religious custom in some Arkansas communities to bury the dead with the feet to the east so that on Resurrection Day the body will arise facing east. The inscription is facing west as it is believed that a person, when reading the headstone, would be in a proper position (facing east) to say a prayer for the deceased.

Fort Smith National Cemetery was placed on the National Register of Historic Places on May 29, 1999.

Monuments and Memorials
A carillon was donated by the American Veterans as part of their international living memorial program, which began shortly after World War II. The carillon was dedicated on Veteran’s Day, 1986.

The Vietnam Veterans Memorial of granite and bronze was dedicated May 30, 1998 to honor all who served their country during the Vietnam War.

Judge Isaac C. Parker - A veteran of the civil war and two-time congressman, was appointed by President Grant as United States District Judge of the western district of Arkansas. Judge Parker had criminal jurisdiction over the frontier territory and Indian Territory. Judge Parker served the court for 21 years and became known as the "Hanging Judge". Judge Parker died Nov. 17, 1896.

Brigadier General William O. Darby - A veteran of World War II known for his many exploits and establishment of the rangers. General Darby, a West Point graduate, patterned his rangers after the British Commandos. Only five days after Germany's surrender in 1945, Colonel Darby died in Italy's Poe Valley. His courageous actions were recognized by the U.S. Army, which posthumously raised him to the rank of brigadier general.

More than half of VA's national cemeteries originated with the Civil War and many are closed to some burials. Other sites were established to serve World War veterans and they continue to expand. Historic themes related with NCA's cemeteries and soldiers' lots vary, but visitors should understand "Why is it here?" NCA began by installing interpretive signs, or waysides, at more than 100 properties to observe the Civil War Sesquicentennial (2011-2015). Please follow the links below to see the interpretive signs for Fort Smith National Cemetery.