April 30-May 6 Outside of Fredericksburg, Virginia, General's Lee's shrewd tactics lead the Confederates to victory over a much larger Union force led by the cautious, unaggressive General Hooker at the Battle of Chancellorsville.

May 19-July 4 The Union Army of the Tennessee, commanded by General Grant, surrounds Confederate forces in the city of Vicksburg, Mississippi. General Grant's army besieges the city for nearly two months before the Confederates surrender.

May 21-July 9 In conjunction with Grant's siege of Vicksburg, Union troops under the command of General Nathaniel Banks besiege the Confederate garrison in the Mississippi River town of Port Hudson, Louisiana. After hearing of the capitulation at Vicksburg, the Confederate force surrenders, granting the Union Army control of the river for the rest of the war and effectively splitting the Confederacy in two.

Aerial photograph of Port Hudson National Cemetery, 1948.  In many Civil War-era national cemeteries, the lodge is
situated just inside the entrance, and the flagpole is centrally located.  U.S. Army photograph, NCA collection.

July 1-3 Fresh from his success at Chancellorsville, General Lee leads the Army of Northern Virginia into the second Confederate invasion of the North. General Lee hopes to provision his troops off of northern farms, and perhaps urge northern popular opinion toward peace. Meanwhile, President Lincoln once again changes his top military commander, to General George Meade. The two sides clash in and around the town of Gettysburg, Pennsylvania. In the bloodiest battle of the war, Union forces hold their lines in the face of relentless Confederate assaults and successfully counterattack the Confederate positions, forcing General Lee to withdraw. The combined casualties of the Battle of Gettysburg are over 50,000. Despite his victory in the battle, General Meade is roundly criticized in the north for not pursuing the Confederate Army. Today, the Battle of Gettysburg is seen as a turning point in the war, and the "High-Water Mark of the Confederacy."

November 19 During the dedication of the Soldiers' National Cemetery at Gettysburg, President Lincoln delivers the Gettysburg Address, perhaps his most famous oration and one of the greatest speeches in U.S. History. In 1909, 100 years after Lincoln's birth, the War Department installs a series of cast-iron tablets in national cemeteries, with the text of the Gettysburg Address. 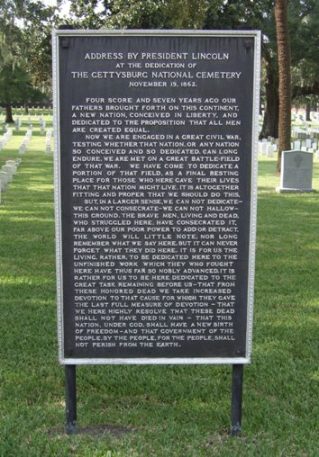 November 23-25 In the Battle of Chattanooga, General Grant's army overwhelms a series of Confederate positions around the city, eventually routing the Confederate Army of Tennessee, commanded by General Bragg. With this victory, the Union controls Chattanooga, which is used as a springboard the following year for the Union invasion of Georgia. The triumphal arch built here in 1879 is one of five erected at the national cemeteries as gateways: "The archway, by its hugeness, its immensity, Roman in character, in its architecture military, conveys the very idea in itself that it stands as a monument over the country's dead," described the Chattanooga Daily Times. 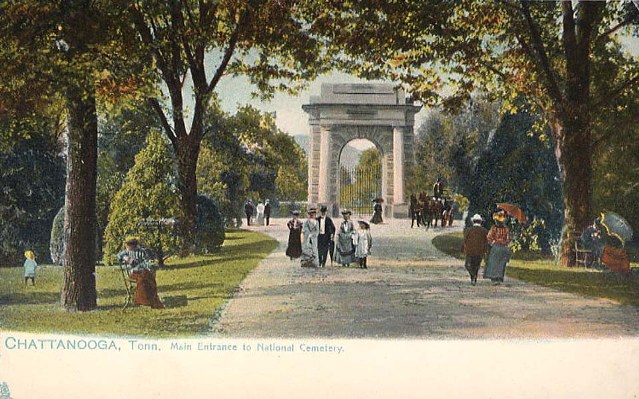