February 22 Congress passes Public Law 37, An Act to Establish and Protect National Cemeteries. This law authorized the Secretary of War to mark the burials in national cemeteries with permanent headstones, and to construct permanent buildings and structures therein. In part, it reads:

Be it enacted...that in the arrangement of the national cemeteries established for the burial of deceased soldiers and sailors, the Secretary of War is hereby directed to have the same enclosed with a good and substantial stone or iron fence; and to cause each grave to be marked with a small headstone, or block, with the number of the grave inscribed thereon, corresponding with the number opposite to the name of the party, in a register of burials to be kept at each cemetery and at the Office of the Quartermaster General, which shall set forth the name, rank, company, regiment, and date of death of the officer or soldier; or if unknown, it shall be so recorded. 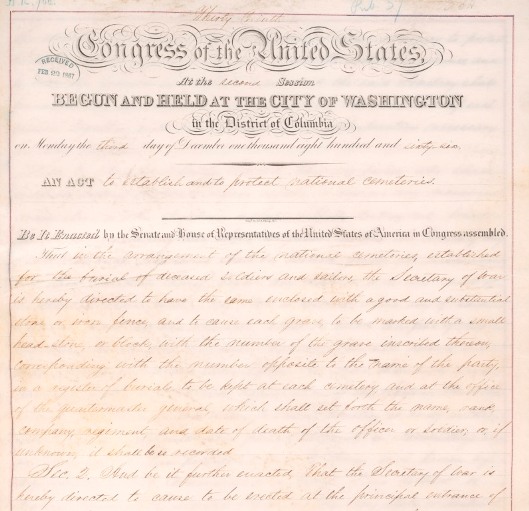 Image of An Act to Establish and Protect National Cemeteries, 1867.  Courtesy of the National Archives and Records Administration.
Next
return to top